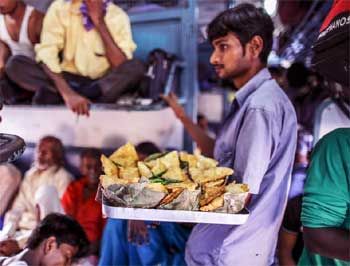 Seema boarded on train with her 5yr old daughter. It was her first travel through train. Train was very crowded and it was very difficult to even pass through lanes between seats.

When train started to move a snack vendor came through that crowd holding on to his bag tightly and trying to sell snacks to people in train. Vendor seemed very poor, covered in raged clothes.

Passing by seema that vendor handed out a pack of snacks toward her saying, “Only 10rs mam..”


Seema looked at him with disgust then refused and asked him to move ahead but her daughter started pulling her hand and said, “Ma, please.. please buy one for me..”

Vendor was still standing there holding that packet. Seema looked at him with anger and said, “Go away..”

Vendor left. Her daughter waved bye toward that vendor which bought smile to his face and he reciprocated.

Seema was very angry because of all the discomfort she had to go through while traveling in train and now her daughter was sulking about not buying that snack.

After sometime when train reached another station while walking out of train compartment girl saw that vendor man sitting by train door. Girl smiled.

She said to her mother, “Mother can we give him some money?? he seems hungry..”

Seema refused to help and tried to keep her daughter away by saying, “Ignore him.. he is no good person. These people take away little girls in their bags.”

Seema and her daughter got off the train and walked a bit just then they heard a voice calling them. When seem turned back she saw that vendor was waving his hands toward them and started to walk toward them.

Seema thought of him as a stalker and started running faster with her daughter, ignoring shouts from behind.

She was near exit and saw that vendor was still following them. Seema walked more fast and stopped a taxi. She hurriedly pushed her daughter inside taxi and then herself got seated just before vendor could reach them. She closed taxi door and asked driver to step on ignition.

Vendor reached them just before taxi could took off. He was tapping on the taxi door non stop, seema tried to ignored it just then a flash of shiny thing caught her attention. When she looked at vendor side she saw that it was a bracelet and she immediately recognized it. It was her daughter’s.

Seema rolled down window of car and instantly that vendor handed out that bracelet to seema through that window and said, “Mam.. your daughter gave me that bracelet before getting off that train.”

Just before leaving that vendor pulled a packet of snack out of his bag and gave it to her daughter saying, “It’s for child..”

Before she could say anything vendor had left and taxi took off. Seema realized her mistake and learned a lesson for life. She was happy to know that her daughter have a good heart but felt guilty to think wrong of that vendor just because of his appearance.

She learned that we should not prejudice be about someone just because of their look or what they do.

Moral:
We should not make any Prejudice opinion abo

ut anyone Without knowing about them. Never Judge someone on basis of their appearance.

Keywords : Short Moral Stories for Adults – Learning from Kids Short Stories, Stories to Learn about Prejudice and Life in English