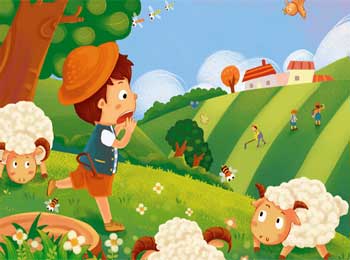 Once in village lived a shepherd boy. He used to take his sheep to meadow located near forest for grazing. He would leave his sheep to graze and himself would sit under a tree and watch them. This was his daily routine.

He used to get bored sitting there and wanted some adventure in his life.

So, one day while grazing, he thought of doing something for fun and started shouting loudly, “Wolf came, wolf came..!!”

Some farmers who were working in fields near by, heard him and left there work to help him but as soon as they reached him, boy burst into laughter.


Farmers got very angry and scolded him and warned him to not make such jokes again ever and returned to their work.

Shepherd boy had great fun watching all this and didn’t take their warning seriously.

Farmer who were working in near by field ran to him but as soon as they reached there, shepherd boy started laughing out loud at them.

Farmer again scolded and warned him but it had no effect on him and boy did this again and again and every time when farmers come to help, he would laugh at them.

One day, shepherd boy was sitting under shade of tree, when he saw that a wolf really came there. Seeing wolf, he shouted for help, “Wolf has come.. wolf has come..!!”

Farmers heard his cry but they were fed up with his mischief and thought that even today he was trying to play prank on them and didn’t went to help him.

Shepherd boy ran to farmers working in field and started crying, “Wolf really came.. Please help me, it has already killed many of my sheep..”

Farmer said, “You play mischief with us everyday. We thought that your intention is the same even today. You had lost our trust. That’s why none of us came to your aid.”

The shepherd boy realized his mistake and took a vow that he would never lie again and would not disturb others.

Learning:
Telling lies over and over again Hurts people’s Trust and it Breaks their Trust in you. Therefore, If you want to be Someone’s confidant, then always stay with the Truth.

You May Also Like: Farmer and Fox Story – Loss In Moment of Anger!