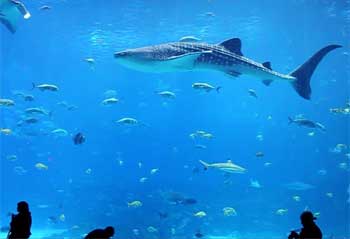 For research some marine biologist started to do an experiment. For this they place a Shark into large tank and then released several small fishes in the same tank.

As shark and fished were left in tank after sometime shark swam around and attacked around and ate all the small fishes.

Now, next time biologist inserted a strong piece of clear fiber glass in middle of tank creating to separate partitions one for small fishes and other for shark alone.

Now again as sharks and fishes were left, shark started to attack but this time shark slammed into the fiber glass inserted in the tank. However the shark kept repeating this behavior again and again. Meanwhile all the small fishes used to swam around it unharmed behind the fiber glass. Eventually after some hour shark gave up and stopped attacking.


Same experiment was repeated for several days. Biologist noticed change in behavior of shark. Now, shark was less aggressive and made lesser attempt to attack small fishes. With time shark simply got tired and stopped attacking.

After this biologists removed the fiber glass from the tank but even after removal of glass shark didn’t attack Because shark was not trained to believe that a barrier existed between it and smaller fishes. After this smaller fishes swam with shark in same tank unharmed.

Moral:
After experiencing Setbacks and Failures again and again most of us Emotionally Give Up and Stop trying. We start to believe that because we failed in past we will Fail every time But that’s just a Barrier in our Head. So, we should keep on working without fear of Failure.

You May Also Like: Farmer and Nobleman Story (Helping Others)

Search Keywords: Shark in the Tank Story – Never Give Up Best Motivational Short Stories for Kids, Inspiring story for Success