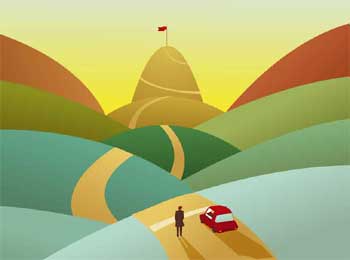 Once in a city lived a Seth (Rich man) who was pious. Whenever any Mahatma or Sadhu visited his city, he would invite them to his house and serve them.

One day, a Mahatma came to Seth’s house. Seth and Sethani (Rich man wife) welcomed Mahatma and served him food. After some time, Seth went to market for some work.

After having food, While waiting for Seth to return, Mahatma ji asked some question to Sethani.

First question was – How many children do you have?


Sethani replied – By grace of God, we have four children.

Second question was – How much is your wealth?

Sethani replied – By grace of God people call us Lakhpatis.

In meantime, Seth ji came back from market. Later, Seth ji went along with Mahatma to see him off. On way, Mahatma ji asked same question to Seth ji.

First question was – How many children do you have?

Seth replied – I have one son.

Mahatma started thinking, it seems that Seth is lying, his wife said they have four children and i myself had seen 3-4 children coming and going around while i was there and he says he have only one son..!!

Mahatma asked second question – How much is your wealth?

Mahatma ji was again astonished because Sethani said that people call them Lakhpatis. They have so many factories and business running and he says his money is twenty five thousand rupees..!!

Mahatma was surprised to hear this answer because Seth looked like man of 75 years and he says his age is 40 years..!!

Mahatma ji couldn’t understand and asked – Seth ji, why are you lying?

Seth ji with folded hand said – Maharaj! Lying is a sin, especially lying yo saint is even greater sin.

Your first question was about my children. Actually I have four sons but i have only one obedient son. I consider him only as my son.

How can those who do not obey me be my sons?

How is it my wealth when it will be taken away by my friends and relatives after my death?

In the third question you have asked my age. Forty years ago I met a sage like you. Taking refuge at his feet, I have been doing bhajan-practice and sage service since then.

That is why I consider this period of forty years as my age.

You May Also Like: Sage Lesson to Rich Man Story (Must Read)

Search Keywords: Seth Answer to Mahatma’s Question (Must Read), Rich Man Way to Thinking Beautiful Story to Make You Think about Life, Story to Share With Family and Friends, Deep Meaning Story for Adults, Story with Learning for Life, Best Motivational Story for Adults to Understand Life, What is Truly Yours? Short Story to Share