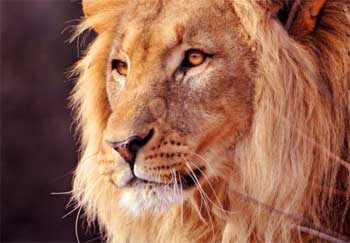 Once a pregnant lion died soon after giving birth. New born cub didn’t know what to do. Cub started to roam around just when it saw a herd of sheep. Seeing that little cub, mother sheep decided to raise it as its own.

With time, that little cub grew up along with sheep and started to think and act just like a sheep. It would even eat grass like sheep.

Lion was teased by other sheep for being so different. Some of them would say, “You are so ugly. Your voice is so weird. You are disgrace to sheep family.”

Lion felt sad that he didn’t looked like them and that something was missing. Lion tired to get along with sheep herd but still it felt that he had let down the sheep community by being so different and that it was a waste of space.


One day, an older lion saw herd of sheep and decided to attack it. While attacking, it saw the young lion running away along with the other sheep.

Older lion got curious and decided to pursue younger lion. Soon it was able to pounce on young lion and then asked, “Why are you running away with sheep?”

Younger lion who had never seen lion, shaking in fear it said, “Please don’t eat me. I am just a young sheep, please let me go..!!”

Hearing this, older lion growls, “What?? You are not a sheep.. You are a lion just like me..”

Young lion just kept on saying, “I am sheep.. please let me go..”

At this point the older lion gets an idea. It drags the younger lion to a river nearby and asks it to look at its reflection. Upon looking at the reflection and then older lion, young lion realized who he really was.

Young lion learned that it was not a sheep but a lion. The young lion feels so thrilled that it let’s out a mighty roar.

Moral:
Many time we are unaware of our True Potential because of Limiting Beliefs that we inherits from our surroundings.

Allow your awareness to shine light onto all your limiting beliefs and find who you truly are.

You May Also Like: Fish and Monkey Comparison Story

One thought on “Self Awareness – True Potential..!”