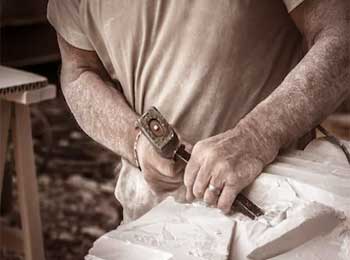 Once in a village lived a young sculptor, who used to make very beautiful statues and by this work he earned a good income.

He had a son who started making statues from his childhood, even his son used to make good statues. Father would get happy to his son work but every time he used to point out one or other mistakes in his son work.

Still his son never complained and continued to improve his work, following the advice of his father.

Because of son continuous improvement, his work started becoming better than his father’s. Then a time came when people started to buy his statues paying more money while his father statues continued to be sold at its earlier price.


Son got young and was earning better but still his father used to point out mistakes in his son work. Now son didn’t like it, he used to accept his shortcoming and would improve but didn’t work wholeheartedly.

Then one day, son lost his patience and said,”You are pointing out my mistakes as if you are a big sculptor but if that’s case then your statues would have sell at higher price than mine. I don’t think i need your advice anymore. My work my statues are perfect.”

After that day, father stopped giving any advice or pointing out any mistakes in his statues.

For some months son was happy but then he realized that now people don’t praise his work as they used to. His statues rate also started to fall.

Son couldn’t understand the reason. So, one day he went to his father and told him about his problem.

Father listened to it but didn’t say anything. Then son said, “Did you know that this was going to happen?”

Father replied, “Yes! because many years ago i had to face such situation too.”

Then son said, “Then why didn’t you explained it to me?”

Father replied, “Because you didn’t want to understand at that time. I know i can’t make statues as beautiful as yours. It is possible that sometime my advice wouldn’t have been right one, nor is it that because of my advice you were able to make better statues.

But when i used to show flaws in your statues, then you yourself would not feel satisfied with your own work and tried to improve yourself even more.

That determination of doing better and improving your work more was the reason for your success.

But when you got satisfied with your own work and thought that your work is perfect, your growth stopped.

People always expected better from you and that’s reason your work was not appreciated anymore and you were not getting much money for them.”

Son listened to his father and kept silent for a while and then asked, “What should i do now?”

Father replied, “Learn to be dissatisfied. Think that there is room for you to get better than present work. This one thing will inspire you to be better always.”

You May Also Like: Using All You Strength – Father Son Story

One thought on “Sculptor Father and Son Motivating Story about Work”