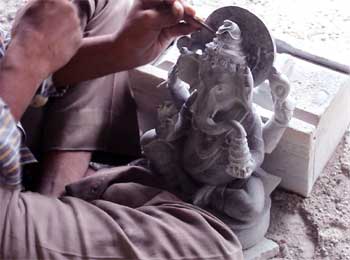 Once in a village lived a merchant who had great faith in God. One day when he was returning to his village from work, on his way he saw a shining stone.

Merchant liked that stone very much and picked it up. On his way he thought, “I can get a beautiful idol of God carved from this stone and keep it in home.”

Thinking this, he went to a famous sculptor shop and said, “I want you to carve a beautiful God Idol from this stone.”

Sculptor replied, “Sure. You can back after a week to take carved Idol.”


After merchant left, Sculptor started his work. He took his tools and as soon as sculptor hit the stone, he realized that stone was very hard.

Sculptor stuck again with full fervor but stone did not budge. Now, sculptor got worried. He continued to hammer that stone but stone didn’t break.

Sculptor tried for several days and worked 99% from his side trying to carve that stone but he couldn’t break stone.

Few days later when merchant came back to get carved Idol, sculptor told him that he was not able to make idol with this stone as it was too hard.

Later, merchant went to another shop and asked sculptor to make idol from same stone.

Sculptor took up his tools and started hitting stone to cut it, as soon as sculptor stuck first hammer on stone, it broke as it was greatly weakened by hits of first sculptor.

Merchant was very happy to see this and later sculptor carved out a beautiful idol of God from that stone.

After receiving Idol, on his way back merchant thought of condition of first sculptor, how he worked 99% but finally got tired and gave up. If he had done one more strike, he would have succeeded.

Learning:
Same applies in our Life. Many people feel that despite so many efforts, they are not able to succeed but truth is that they get tired before last attempt.

One should keep trying continuously, because who know if next attempt could be last attempt which can change one’s Life.

You May Also Like: How Does a Person Become Great?

Search Keywords: Sculptor Efforts and One Last Strike Motivational Story about Persistence and Working Hard until Results are Achieved