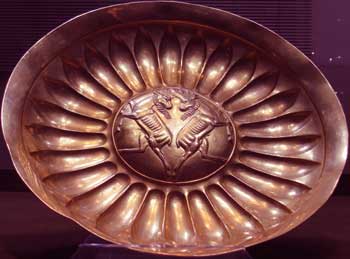 Once upon a time, two salesman Sam and Tom came up together to far away town. They used to sell hand-made jewels. When they came to town they decided that one will sell in one part of town and other will sell in another part.

Also, after one has gone through area once, other can go and sell in that part of town.

In street a little girl saw salesman with jewels and wanted to buy it. She went to her grandma and asked her for money.

Grandma replied, “Honey, we don’t have any money to buy even proper food than how can i buy you bracelet..”


Girl was disappointed but still wanted to buy a jewel for herself. She went inside kitchen and bought out an old blackish plate and said, “Grandma, if we don’t have money, can’t we buy one in exchange of this plate..”

Grandma asked salesman (Sam) to come inside. Sam saw their condition and understood that they were poor so responded rudely to them.

Old lady was holding that plate and showed it to salesman saying, “I don’t have money but you can take this plate in exchange for a bracelet.”

Sam didn’t want to waste much time with them so just to get over with it he looked at that plate but to his surprise he found out that it was made of gold. He got greedy and thought to himself that he can deceive that old lady and could get the plate by paying least.

So he planned that he would leave for now and return later when she would accept even less for plate.

He didn’t let it on that he noticed it and said, “This is not even worth one bracelet. You can’t get anything for this..” and left.

Meanwhile, other salesman (Tom) had finished his part of town and now went toward another part of town.

He ended up reaching same house of old lady. Seeing salesman little girl again went to her grandma and asked for bracelet.

For little girls happiness grandma went to salesman and showed him plate and said, “Can you give me one bracelet in exchange for this old plate??”

Tom humbly replied, “Sure..” and examined it and found that it was gold plate.

He replied to her, “Mam, all my goods and money altogether are not worth for this plate. It’s very costly.”

Old woman was shocked at discovery but seeing Tom honest reply she said, “If you know it’s value, i will gladly accept whatever you can offer in exchange for this plate..”

Tom took out all his stuff and money and said, “Mam, i will give you all these plus all the money, if you just let me keep few coins to return to city… in exchange of golden plate..”

Old lady accepted his offer. Tom left with gold plate and some coins to pay for ferry to return to city.

After sometime Sam returned thinking of all the money he could get with that plate and went to old lady.

Sam went to her and said, “I have changed my mind.. I can offer you few cents for that useless black plate..”

Old lady was angry with him for lying yet calmly replied to him, “You lied to us.. Other salesman came and he told us the value of plate and made trade with us. He has left with that plate. I have nothing to do with you now..”

Sam could do nothing now. His greediness has cause him great lose.

Moral:
One should not get Greedy and try to Cheat other and live Life with Honesty.


You May Also Like: Be Honest – Old Man’s Advice