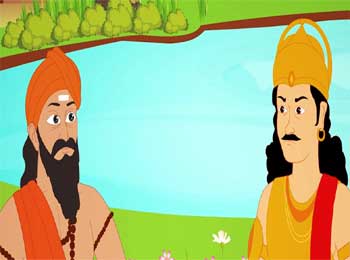 Once a Saint entered into palace and went straight to King’s court and started looking here and there.

Seeing this, minister came near Saint and said to him, “O Saint, this is royal court. Do you not see that King is sitting on throne in front? Bow down, you should bow down to King.”

Saint replied, “Hey minister, You go and ask your King – whether you are slave of mind or is mind your slave?”

Minister went near King and asked what Saint asked to him.


King was surprised and said, “Minister! What kind of question is this? All human beings are slave of their mind. I am too. I do as mind tells me to do.”

Minister went back to Saint and told him King answer.

So, how do i bow down to him? You King is not King, he is subordinate.

Think, if horse is controlled by rider then, horse can be taken anywhere but Instead of horse being under control of the rider, if rider is under the horse control then horse puts rider in such a situation that it gets difficult to get out of that situation.”

It was not Saint’s Ego but there was goodwill for the welfare of the King. King understood the deep meaning behind Saint’s word. So, he stood up from throne and fell at Saint’s feet to take his blessings.

You May Also Like: Desire to Eat Dates – Sadhu Thoughts

Search Keywords: Saint Question – Who Should Bow to Whom? King and Saint Story, Who is Slave? Deep Meaning Story about Mind, Control Your Mind Short Story for Spiritual Enlightenment, Real Motive of Life Story

One thought on “Saint Question – Who is Slave of Whom?”