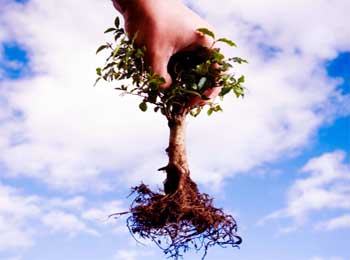 Once in a village lived a wealthy man was very worried because of bad habits of his son. He tried every way to make his son understand and leave bad habits but to no avail.

One day, wealthy man got to know that a saint has come to their village. Man went to saint and requested him to help his son to get rid of his bad habits.

Saint agreed and asked him to bring his son next morning.

Next morning wealthy man came to saint with his son. Saint took young man with him for stroll through the garden.


While walking saint stopped suddenly and pointed toward a tiny plant growing there and said to young man, “Pull it out..!”

Young man held plant between his thumb and forefinger and pulled it out.

After this saint continued to walk with young man. After walking a little, he stopped again and pointed toward a slight bigger plant and said, “Pull it out..!”

Young man grabbed that plant and pulled hard and it came out with its root and all.

“Now, pull that one..!”,said saint pointing toward a bush.

Young man used all his strength to pull that out.

“Now pull this one out..!”, said saint, indicating toward a guava tree.

Young man grasped the trunk of tree and tried to pull it out but it won’t budge.

At this saint smiled and said, “So, is with bad habits. When they are young it is easy to pull them out but when they take a hold they cannot be uprooted.”

Learning:
Don’t wait for Bad Habit to grow in you. Drop them while you have Control over them.

You May Also Like: Rich Man Bad Habit and His Servant Response..!