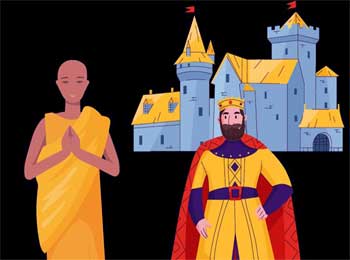 Once lived a King who was very arrogant. Due to his arrogance, he did not have good relation with King ruling surrounding kingdom. Even people of his own kingdom used to criticize him.

A sage who was passing through kingdom, heard about King and thought of teaching him a lesson.

Sage started walking toward King’s palace and as soon as he reached there, he went straight inside without asking guards for permission.

When King saw Sage, he was filled with anger and said, “What is this behavior? How did you come inside without asking for permission?”


Sage politely replied, “I want to stay at this inn tonight..”

King got enraged, hearing this and angry said, “This is my royal palace, it’s not an inn, go somewhere else..”

Sage asked, “OK. Tell me whose palace was this before you?”

King replied, “It was my father’s.”

Sage again asked,”Whose palace was this before your father?”

Sage smiled and said, “O King, just as people come to an inn and stay for sometime, this royal palace was your grandfather’s for sometime and then for sometime, it was your father’s palace and now, for sometime it is yours. Tomorrow it will be someone else. Then why are you so arrogant about this?”

King understood the deep meaning hidden inside Sage words and fell at feet of Sage and took an oath to never be arrogant again.

Learning:
Whatever wealth we have, all that is ours, is ours only for a short while.. after a while owner changes.. So one should not get Arrogant about things they have.

You May Also Like: Scholar Arrogance – Looking Down on Others!!

Search Keywords: Sage Question to Arrogant King – Deep Meaning, Never be Arrogant about What you Own Short Story with Learning, King and Sage Story with Life Lesson, Stories for Adults

One thought on “Sage Question to Arrogant King – Deep Meaning”