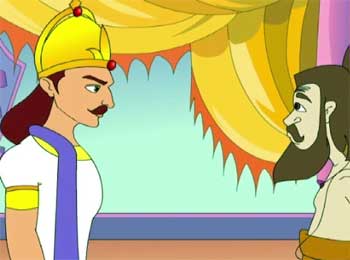 Many years ago, a very pious King wisely and fairly rued over his kingdom. Everyone was happy under his rule and respected and loved him a lot.

However king was not happy and cause of his worry was his one and only son. Prince was brought up with great love and care because of which he turned into an ill mannered and irresponsible person.

He didn’t posses any quality that a prince should have. He would behave cruel toward common people and even disrespected his teacher.

King was worried as years passed by and prince showed no signs of improvement.


One day king got to know that a wise and old sage had came to his kingdom. So king decided to take prince to him.

After knowing all sage asked king to leave prince in his care for few days.

After observing prince for some days, sage called him and said, “Dear prince, I have a way by which you can become wise as your father and then you will not get any scolding for him and everyone will respect you..”

Sage pointed toward a plant and said, “You see that “Neem Plant”, it is full of wisdom. If you pluck some leaves and eat it them you will become wise..”

Prince obeyed sage and took some leaves. Hardly had he bit the leaves and he started vomiting. He got angry and said, “These taste very bitter. How can you make me eat such bitter leaves… How can such bitter plant contain any wisdom. I must destroy that plant..”

Saying this plant uprooted that Neem plant and threw it by river.

Now, think about the bitterness inside you.. Your father is such a gentle king but you disrespect everyone.

Kingdom will not be able to flourish much under your rules as because of your behavior you have made many enemies and as time comes those enemies will uproot your kingdom as you have uprooted this plant..

Therefore, you must learn to mend you ways and learn to be king and polite just like your father..”

Prince understood wise words of sage and bowed at his feet and promised, “You have shown me true path and from today onward i shall try to become just like my father..”

So from that day, the prince mended his ways. He became a dutiful person ruled his kingdom fairly and wisely.

You May Also Like: Three Rich Man and Their Kindness

Keywords: Sage Prince Story – Ill Effect of Bitter and Rude Behavior Moral Story, Be Gentle and Polite to Others Moral Stories for Kids