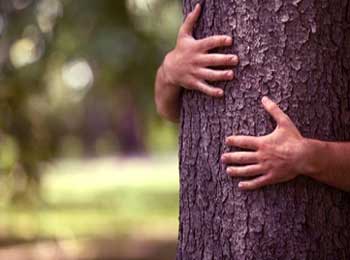 Now, whenever anyone tried to convince him to stop drinking, he would say, “I have not caught this habit, this habit has held me.”

His wife was very worried about his health and him to get rid of this bad habit.

One day a famous Sadhu came to village. Wife took her husband to his ashram. Sadhu asked them about their problem. Wife told all the things to Sadhu. Sadhu understood the root of their problem and asked husband and wife to come again next day for solution.


Next day, both husband and wife reached ashram and saw that Sadhu was standing there holding a tree.

Husband asked Sadhu, “What are you doing? Why are you holding tree like this?”

Sadhu said to them, “You guys go and come tomorrow.”

Next day when both reached ashram, Sadhu was standing there holding tree even today. Again Sadhu asked them to leave and come again.

This happened for a week.

Husband got little irritated and asked, “Maharaj, what are you doing? Why don’t you leave this tree?”

Sadhu replied, “What should i do, this tree is not leaving me.”

At this husband laughed and said, “Maharaj, you are holding on to tree, tree is not holding you.. You can leave whenever you want.”

Sadhu looked at husband with serious look and said, “This is what i wanted you to understand for all these days.. It’s you who is holding on to the habit of drinking, habit is not holding you.. You can leave whenever you want..”

Husband realized his mistake and understood that he himself is responsible for any habit and he can leave it whenever he want by strength of his will.

You May Also Like: Saint and Young Man Story – Uprooting Bad Habit