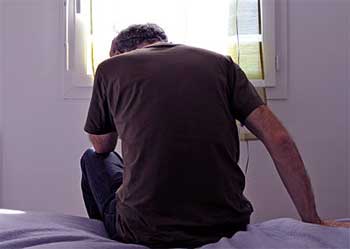 A couple had been married for 10 years but they didn’t had any child. They stayed with each other and really hoped that they will have a child before their 11th anniversary. Their family and friends were pursuing them to get a divorce but they didn’t wanted to get separated because of strong love between them.

One day while husband was returning home from work, he saw his wife walking down street with a man. They were looking very happy. After a week again husband saw his wife with same man again. Husband saw them many times roaming places with each other. Hugging each other.

One evening while husband was returning home, He saw that man dropped her off with a good bye kiss on her cheek. Husband got angry and sad.


After a hectic day at work, Husband was home. While he was holding a glass jug to get water, Phone rang. He received the call. As soon as he picked the call voice came form other side saying, “Hello dear, I will be coming to your home this evening to see you as i promise, I hope..”

Husband hung up call before hearing any further. Husband thought to himself, “It was male voice and i am sure it’s same person i have seen with my wife many times.” He thought he had lost his wife to another man and thinking that glass jug fell from his hand and shattered into pieces.

Listening to noise, his wife came running to him and asked, “Is everything okay??”

In anger he pushed his wife. She fell and wasn’t moving. Few seconds later husband realized that she fell on the broken jug pieces and a large piece has pierced her. Husband tried to feel her breath, heartbeat but there wasn’t any.

His wife was dead. He saw an envelope in her hand. He took it and read it. He was shocked by what was written in it.

It reads :
“My loving husband, words can’t express how i feel so… I had to write down this letter. I have been seeing a doctor for over a week and i wanted to be sure before giving you the big news.

Doctor have confirmed that i am pregnant. Our baby is due 5 months from now. Doctor i have been seeing is my long lost brother whom i contacted after our marriage. He promised me to take care of me and baby and will give us best care without any fee.

He promised to have dinner with us tonight. I had to write to you because i am so happy. Thanks for staying by my side.

Letter fell from his hands. At same time he heard knock on the door it was same man he had seen with his wife. He came in and said, “Hello, i am John, your wife’s brother…….” Suddenly he notice his sister lying in pool of her blood. He rushed her to hospital where she was confirmed dead.

Moral:
We should not be Quick to Judge Other person. In Relationships we should Try to talk and clear things. We should not let our Anger control us because Not everything we see or hear is true.!

You May Also Like: Regrets in Life..! (Husband Wife Fight)

11 thoughts on “Losing Everything in Moment of Anger!!”