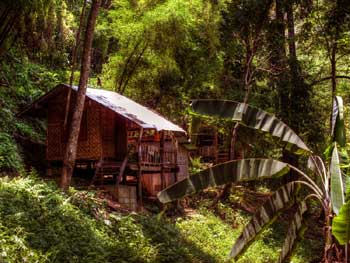 Once two monk returned to their place, after being away for months, traveling around world giving lectures and praying. When they returned home, they were tired and just wanted to have rest. But when they reached their place what they saw was just half of their hut.

Because of heavy rains and winds, part of their hut was carried away by winds and only half of it was left.

When Young monk saw that he became angry. He was hoping to able to rest well when reach home but now there was just a ruined hut.

Young monk said to Old monk, “This is too much..! Things like this create doubt about existence of God. Sinners have palaces in cities, nothing happens to them and poor people like us who spend day and night in prayers, our only hut is in ruins.”


Young monk felt that his prayers were futile and was full of anger and condemnation.

When Young monk was saying all these, Old monk raised his folded hands towards sky and tears of joy started flowing from his eyes.

Seeing this young man asked, “What are you doing?”

Old monk replied, “I am thanking God because who knows what winds might have done.! They could have blown away whole hut but God have created some obstacles for wind and saved half our hut for us.

God is concerned about us poor people, So we should thank him. Our prayers have been heard.”

It was almost night time. There was nothing they could at that time. So they both went in for rest, forced to sleep in that ruined hut.

Young man was full of anger and kept on changing his position all night. He was worried because there were clouds in sky and it was about to rain. He was thinking what would they do if it starts to rain while other monk slept a deep sleep.

When Old monk wake up in morning, he started dancing and singing song. He said, “We didn’t know that there could be so much bliss in broken down hut. If we had known before, we ourselves would have have removed half of roof of our hut.

I never slept so blissfully. Because half of the roof was not there, I saw the stars and the gathering clouds in your sky whenever I opened my eyes during the night and now that the rains are about to start it will be even more beautiful because with half the roof gone, we will be able to hear the music of your rain-drops much more clearly.

We have been idiots..! We have spent so many rainy seasons sheltering inside the hut. We had no idea what joy it could be to be exposed to the sky and the wind and the rain. If we had realized it we would not have bothered your winds, we ourselves would have got rid of half the roof.”

Young monk was irritated and said, “What’s all this nonsense? What is this madness? What are you saying?”

Now I am able to sing a song and you are burning with anger. Very early I came to understand that the Direction in which Life becomes more Blissful is the Right direction. I have directed my whole consciousness towards that direction.”