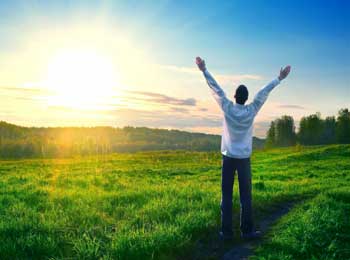 Once in a city, lived a rich man. He used to think that once he became richest person, he will feel perfectly happy.

Over years he worked very hard and and finally succeeded to become richest man of his country but to his surprise, he didn’t feel perfect happiness or satisfied.

He had everything he could ask for but till he felt frustration and never felt bliss that he wanted. He started going around looking for wise person who can help him attain bliss.

Then one day, someone told him about a Sufi saint who was known for his wisdom and helped solve problem of people.


Man took his horse and a very big bag full of gems and diamonds with him and started looking for Sufi saint. At last, he reached village where saint was staying. He found saint sitting below a tree.

When he meet saint he showed him bag of diamonds said, “I have all these diamonds but not a drop of bliss, How can i get bliss? Can you help me?”

Just then Sufi saint jumped and snatched away bag full of diamonds from rich man and ran away.

Rich man ran after him crying, shouting, “I have been robbed!! I have been cheated!! This man is not saint but a thief.. catch hold of him..!”

Sufi saint was well acquainted with the roads of village, so he dodged rich man.

Rich man had never run after anybody, it was too difficult for him. Soon people around started following.

After running around whole village, rich man finally came back to same tree where Sufi saint was sitting when he met rich man.

Rich man found him there sitting under the same tree with bag full of diamonds.

Rich man came to saint, without saying anything saint gave the bag to him. Getting his bag back, rich man hold it close to his heart and said, “I am so happy that i have found my lost treasure.”

Saint said, “Have you tasted a little bit of bliss?”

Saint said, “Unless you lose it, you cannot taste it. I have made you taste it just now. This is the way bliss taste – Lost something.

If you Lose your Ego, you will Gain yourself. Lose the Mind and Gain Consciousness and your are Mature.

Die to past and Be born to Present. Maturity is living in Present, Fully alert and be Aware of all beauty and Splendor of Existence. Then you will be able to Attain real Bliss.”

Rich man understood his meaning and thanked Saint and left.