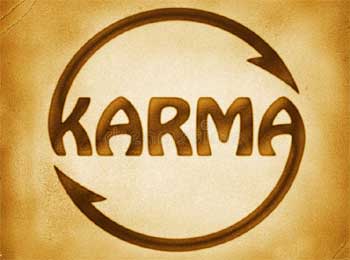 Once there was a Rich man who was very kind and believed in Dharma and Karma.

Many people would come to him for loan and he would never refuse anyone. But he had a policy. His bookkeeper would ask person getting loan, “When will you return this loan In this Life or Next?”

One day a thief came to ask for loan. He knew about this policy of rich man. His main motive was not to get loan but to see this safe so that he can broke into his house at night and steal money.


Thief asked rich man for some loan. Rich man asked his bookkeeper to add record for loan. When bookkeeper asked him about return. Thief said he would return it in next life.

Thief decided to steal from safe of rich man at night. He reached rich man house in night and while waiting for rich man to go to sleep, he hide there in the buffalo shed.

Suddenly thief heard some voice. He saw that two buffaloes were talking to each other and he was able to understand their language.

One buffalo asked another, “You have come today, have you not?”

Buffalo replied, “Yes, i have come to rich man shed today. How long have you been here?”

Buffalo said, “It’s been three years for me. I had borrowed from rich man saying that i will return it in next life. I thought that rich man is stupid and was happy that i wouldn’t have to return that loan.

But After i died and reborn again, in this life i became a buffalo and came to rich man shed. Now, i am paying off his debt by giving milk and will have to stay here till the whole loan amount is paid off.”

Thief listened to this whole thing and looked at buffalo tied. He understood that loan taken from anyone has to be repaid. Thief realized he will have to pay loan back in this life or next.

Thinking this, next morning thief went to rich man house and returned the loan amount and had his name removed from the register.

Learning:
People who do not get their name removed from the register of deceit, have to pay the account of their karma with interest in this life or next. Therefore one should live an honest life.