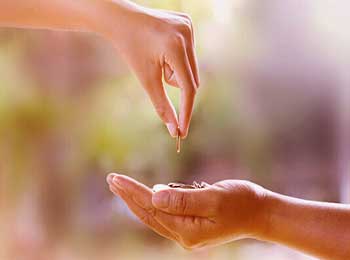 Once there was a rich man who was owner of big factories. One day he closed his factories and all business and became a monk.

Now, he only used to do devotional service to God and soon he became famous. People started coming to him to listen to his discourse.

One day, he told his followers about the incident which made him leave everything behind and inspired him to become a monk.

He said, “One day when i was sitting in my factory, i saw that a dog was run over by a vehicle, due to which it’s three legs were broken. After accident it started crawling with one leg only and entered inside factory.


I felt very sorry and took dog to an animal hospital then while going to hospital a thought came to my mind.

I thought if God provides everyone then i should see how he will provide for this injured dog..

After i got dog treated and came back. I left it outside. Later i saw that another dog came with a piece of bread in his mouth. That dog came near that injured dog and gave that piece of bread to him.

Injured dog ate that bread. After that day, another dog would daily bring piece of bread for that injured dog, soon dog was healed and was able to walk by itself.

Seeing that i realized that God provides for everyone. That day i closed all my factory and business and leave everything behind to follow path of God.

And from day i became monk, i still got everything i needed one or other way.. just like that injured dog was provided by other dog.”

One of the follower who was sitting there, started laughing loudly. Hearing him monk asked him reason for laughing.

That person said, “You saw that God created a way to provide for that injured dog by another dog but what you didn’t understand was among those two who was bigger one?

One who provided for dog or one who was being provided?

After seeing that, you became the injured dog who got dependent on other, who was to be feed. Where as earlier you used to be like that dog who feed other.. You used to run factories which provided living to many other people..

You yourself think, whether what you were doing earlier was bigger work in eyes of God or what you are doing now?”

Monk realized his mistake and went back and started his business factory again while following devotional path.

Learning:
We should Understand that We need not to stop doing our Karma (Work) to follow path of devotion. As it is said – Work for Work’s sake, not for yourself.

Search Keywords: Rich Man and Two Dog Story – Giver or Receiver?, Understanding Concept of Karma/Work, Story with Deep Meaning for those Who want to Follow Path of Devotion