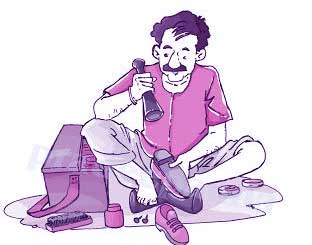 Once in a village lived a rich man. Near his house was a small shop of a poor cobbler. That cobbler had special habit that whenever he worked, stitched the shoes, he kept on humming the hymns of God.

Once rich man got sick. He consulted many doctors but there was no improvement in his health. His health was getting worse day by day.

One day, he was resting in his garden. Suddenly the sound of singing of hymns reached rich man ears. Hearing his hymns, rich man felt good. Now, rich man started listening to him everyday.

In no time, rich man became so enchanted, that he felt like cobbler’s hymns were taking away his illness. For a while, rich man forgot about his illness.


This continued for some days. Slowly, rich man health started improving and he got well again.

One day, he called the cobbler and said, “Even great doctors could not cure my illness but you hymns improved my health.”

After thanking him, rich man gave him thousand rupees as gift. Cobbler happily accepted that money and went home.

But that night cobbler was not able to sleep at all. He kept thinking about that money all night that where should he hide it, how to keep it safe and what can he buy with that money, how can he make more money. Due to this thinking, he was not able to work properly.

Now, all he did was think about money, even while working. He would not even sing hymns anymore. Slowly, he stopped going to work.

Then one day, cobbler went to rich man and giving his money back, he said, “Take your money back, because of this money i have no mental peace. I forgot to sign hymns. This wealth broke my relationship with God.”

After returning money cobbler left and from that day on wards, his life was back to how it used to be. He started going back to work, singing hymns of God while working.

Learning:
This story, shows us that if one let money enter his mind, it can take away one’s peace of mind. If you get money then invest it, use it but don’t let it get in your mind, only then you will be able to go in right direction in life.

You May Also Like: Four Lamps and Saint Warning – Greed Story

Search Keywords: Rich Man Gift to Cobbler – Story about Money, What Matters Most? Money or Peace of Mind, Short Story for Adults, Story with Important Life Lesson, Story to Share with Family and Friends, Short Story for Kids

One thought on “Rich Man Gift to Cobbler – Story about Money”