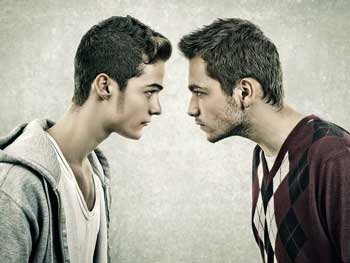 Once in a city lived two friends Vikas and Deepak. They started a business venture together by investing money equally.

They worked very hard and after years they earned a lot of money with that business. After sometime Vikas thought of launching a new business venture. He didn’t had enough so he persuaded Deepak to invest with him.

Deepak wasn’t sure about new idea but still agreed.

Both worked hard but their new business failed. They had to face heavy losses and all their hard earned was spent to keep new business from sinking but still their business collapsed.


With in few years both friends were went from riches to rags.

Deepak couldn’t forgive his friend. He felt that Vikas was responsible for his loss as he was the one who persuaded him to invest in his business idea and because of lack of his judgement, he lost everything.

With time Deepak anger toward his friend was turned to fury. He decided to take revenge on him. So, One day while no one was around, he went to Vikas’s house and set it on fire.

While he was fleeing from the scene, Vikas saw him but couldn’t prove anything. Seeing his home burnt away, Vikas was burned with rage toward Deepak and decided to take revenge on him in his own way.

Vikas went to bank and took a loan. He set-up a business and made some money with it. He made connection in market during that time. Because of his connections and business he had advantage over Deepak. So slowly he started to do destroy his life by making him lose everything he had left with him.

In few months Deepak lost everything. One day he went to Vikas’s house and said, “Let’s stop this madness.. We both have hurt each other enough..”

Vikas replied, “I myself don’t enjoy revenge but you left me with no choice..”

Deepak hesitantly asked, “Then is its possible to put it all behind and become friends again..??”

As with time person might learn to forgive but one can never forget wrong done to them..”

Moral:
When in Anger we should try to Stay calm. Once damage done to Others can’t be taken back.

More Anger Stories : Lost Everything in Moment of Anger..!! (Think Before You Act)

One thought on “Revenge Story – Forgive and Forget..!”