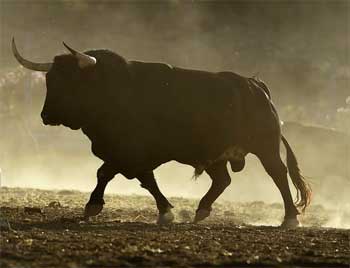 Once upon a time, In city, a certain calf was born and was bought by high class rich man. Calf was well bred for strength. Rich man got very fond of gentle animal and took good care of him and fed him only the best.

When Bull grew up, he thought to himself, “I was bought up this generous man. He gave me such good care and love. Now, i am a big grown up bull and there is no other bull who can pull as heavy a load as i can. Therefore, I would like to use my strength to give something in return to my master.”

Thinking this he went to his master and said, “Please find some wealthy merchant who is proud of having many strong bulls. Challenge him by saying that your bull can pull one-hundred heavily loaded bullock carts.”

Master trusted him so following his advice, he went to such a merchant and struck up a conversation about bulls in city.


Merchant said, “Many have bulls but no one has any as strong as mine.”

Rich man replied, “Sir, i have a bull who can pull one hundred heavily loaded bullock carts.”

Merchant said, “How can there be such a bull..! It’s not possible.”

Rich man replied, “I have such bull and i am willing to take a bet.”

Merchant said, “OK then i will bet a thousand gold coins that your bull cannot pull a hundred loaded bullock carts.”

So bet was made and they agreed on date and time for challenge.

Merchant prepared one hundred big bullock carts attached together and filled them with sand and gravel to make them heavy.

Rich man bathed his bull and decorated him for challenge. Then on decided place, he harnessed him to cart and climbed up onto it. Rich man being high class couldn’t resist urge to make himself seem important.

He cracked a whip in air and yelled at his bull, “Pull, you dumb animal. I command you to pull.”

Bull thought to himself, “This challenge was my idea. I have never done anything bad to my master and yet he insults me with such words.”

So, he remained in his place and refused to pull carts.

Merchant won bet. He laughed and demanded his winnings from bet. Rich man had to pay thousand gold coins. He returned home and sat down, saddened by his lost bet and embarrassed by blow to his pride.

When they arrived home. Bull saw his master sad face and asked, “Why are you sad?”

Man replied, “I lost thousand gold coins because of you. Not only that i got insulted in front of all.”

Bull said, “But you called me dummy. You even cracked a whip in air over my head. You tell me – Did i ever break anything or did anything wrong or behaved like a dummy anyway?”

Bull then said, “Then, why did you call me dumb animal and insulted me in front of everyone!!

But since i was one to ask for challenge and i feel sorry for today. You again go to merchant and make same bet for two thousand gold coins. This time remember to use only respectful words.”

Rich man realized his mistake and went back to merchant and made bet for two thousand. Merchant who had already won thought it would be easy money so agreed.

Again same preparations were made at same place.

Rich man fed and bathed bull and hung a garland of flowers around his neck. When all was ready and carts were attached. This time rich man touched bull’s head with his hands and patted him gently and said, “My son, please do me honor of pulling these one hundred bullock carts and show them your strength.”

Listening this, Bull pulled load with all his might and dragged heavy carts until finish line.

Merchant was in disbelief and had to pay two thousand gold coins. Onlookers were so impresses that they honored bull with gifts. But more important Rich man had won much more than gold coins, it was his valuable lesson in humility and respect.

You May Also Like: Old Witch and Knight Story..!!

Search Keywords: Respect Others Story – Bull and Rich Man Moral Story about Respect, Never be Rude to Others/ Do Not Disrespect Others Short Story