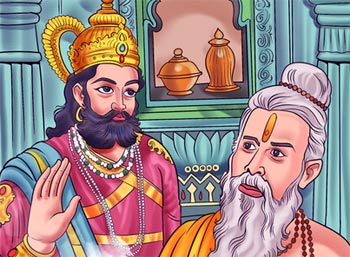 Once there was a Sage Ashtavakra. Some of his followers used to live at his ashram to learn and there was King Janaka who used to visit Sage a lot. With time these followers started to resent King Janaka as sage used to spent a lot of time with him when ever he came.

Because Sage used to spend lots of time with King that Sage’s follower started to whisper, “Why Guru ji spend so much time with a king?? Is our Guru corrupted?? What’s so spiritual about this king?? He wears ornaments and look at way he dressed.. Why our Guru pays so much attention to him??”

Sage knew these feeling growing among his followers.

One day while Sage King and all the monks of ashram were sitting in hall attending Satsang, a soldier came barging in and said, “Oh King.. Your palace is on fire.. everything is burning..”


King replied, “Don’t disturb the Satsang.. I will come once it’ over.. Now, Go back and help there..”

Soldier left and King sat down back to continue Satsang with Sage and monks.

Few days later.. Again when Sage and King were seated in hall with all the followers for Satsang, a helper from ashram came running into the hall and said, “Monkey have come and are making havoc with monks clothes which were put to dry on the clothesline in drying area..”

Listening this all followers immediately got up and ran outside to save their cloths but when they reach outside, they saw that clothes were still there in drying area and there were no monkeys..

Followers realized their mistake, hung their heads down and walked back.. Sage and King were still sitting there..

When they returned Sage pointed toward King and said, “Look… This man is King.. A few days ago his palace was burning, his whole kingdom was in turmoil and his while wealth was burning yet his concern was that Satsang should not be disturbed..

Where as you are all monks and living here to learn higher level of life and have nothing still when you heard about monkeys and your clothes.. you ran out to save those clothes without paying attention to what i was saying..

Where is your Renunciation?? He is a king but he is a renunciated. You are monks, you are using things that other people discard yet there is no renunciation in you. This is where you are. That is where he is.”

Moral:
One’s inner progress can not be judged based on what person does on outside.. How you are within your self and that’s all that matters..

More King and Sage Stories – Everyone is Beggar..