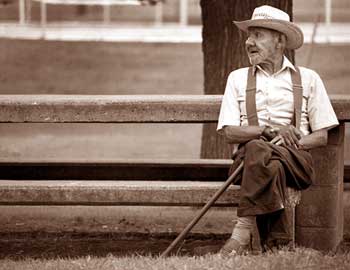 In a land faraway lived a wise old man. Old man loved to watch people like merchants from other town and peasant who used to go to other towns to sell their products. So, Everyday he used to sit on bench placed just outside town to see people passing by that town.

When he used to sit there, His grandchild would come with him there and play around whole time till they go back home.

One day, a traveler approached him and started chatting with him.

Traveler asked, “Old man you have lived in this town, what kind of people of this town are like?”


Old man questioned him, “Where are you from?? What are people like over there in your town??”

Traveler replied, “I am from town from behind the mountains. People there are not very interesting. I found them very cold, mean and withdrawn.”

Old man with sad look replied, “Even people here are mean and not friendly or helpful.”

After this reply traveler left and continued on his journey.

Same day, a little later old man saw another traveler approaching him. They both chatted for little and even that traveler ended up asking same question to old man.

Traveler asked, “What are people living here are like?”

Old man questioned him, “Where are you from?? What are people like in your town??”

Traveler replied, “I am from town from behind the mountains. People there are very generous, kind and friendly.”

After a while even that traveler left. His grand kid who were playing by his side watched all this.

So kid came up to his grand father and said, “Grand pa, you are telling lies. It’s not nice. You taught me not to lie and still you said different things about our town to them.”

Old man hold his grandson in his lap and said, “During those exchanges i didn’t said anything. They themselves said how things were happening. All i did was mirroring and reflecting their own ideas and their own ways of living.”

Moral:
Way we Judge Others or Think about Other is Just of Reflection of our own Thinking and Attitude.

3 thoughts on “Reflection of Oneself..!”