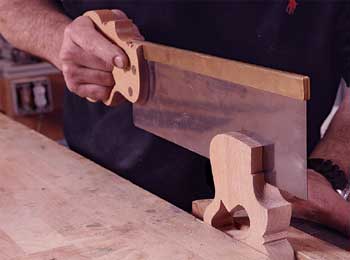 Once upon a time, there was a carpenter who used to work for a merchant in a distant city. One day while working his saw broke. Carpenter needed to get a new saw as soon as possible. So he went to a near by village and looked for a blacksmith.

Carpenter came to know that there was only one such shop in that village. He went to blacksmith’s shop and said, “My saw is broken, can you make a good saw for me?”

Blacksmith said, “Sure, i will make it but it will take time. You can come tomorrow at same time to collect your saw.”

Carpenter offered him to pay more than original price and asked him to make a saw same day.


But blacksmith refused saying, “It’s not about money. If i make a tool in such hurry then i will not be satisfied with my work and i don’t want to lack anything from my side while making tools. I can give you saw tomorrow only.”

Seeing no other option carpenter agreed.

Merchant also checked that saw and asked to carpenter, “How much did that blacksmith take for this saw?”

Merchant thought that in city anyone would be willing to pay three times the original price for such good quality saw. Then why don’t i order a dozen of saws and sell them in city. Thinking this he went to village.

When merchant meet blacksmith he said, “I will give you a big order for saws and will pay you 15rs for every saw you make but i have a condition that after today you will only work for me.”

Merchant thought that may be he needed more money. He said, “OK i will give you 20rs per piece. Is my condition acceptable now?”

Blacksmith said, “No, i still can’t accept your condition. I will determine value of my hard work myself. I cannot work for you. I am satisfied with my price and i don’t want more than this.”

Merchant was surprised at his response and said, “You are a very strange man, who refuses money? I am paying you double the original price.”

Blacksmith said, “You will take saws from me and then take it to city and sell it to poor buyers at high price. I cannot become a medium for exploitation of the poor. If today i get lured then many people will have to pay for it. Therefore, i can’t accept your offer.”

Merchant immediately understood that blacksmith stands firm on his principles and was a honest and true man who cannot be buy with any amount of wealth.

It is a Great Quality to rise your Interest and Think about others. Blacksmith could have easily earned good money but he knew that his slight greed would prove to be disadvantageous to many needy people.

You May Also Like: King and Royal Priest Story – Be Virtuous