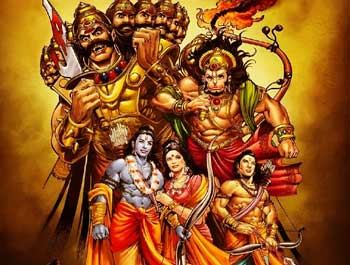 Ramayan is is Historical compilation of incidents that Occurred at end of Tretayug.

Valmiki was Original author of Ramayana, Tulsidas wrote another adaptation known as Ramacharitmanas.

Valmiki the author of Ramayana was a Hunter before he turned a Sage.


Laxman never slept during the Ram’s Exile to forest for fourteen years.

Laxman Rekha incident is not mentioned in Valmiki Ramayana.

Sita wasn’t born to King Janaka. She was the daughter of the Goddess of earth, Bhumi.

The ‘Shiv Dhanush’ was easily moved by Sita during her Childhood. King Janak observed this and this Incident set the condition of “Sita Swayamvar” in the Ramayana.

Hanuman ripped his Chest to show presence of Ram in his Heart.

Hanuman took a vow of Celibacy and didn’t have a wife because of his devotion to Lord Ram.

Hanuman was shot on a leg, by arrow shot by Bharat while flying over Ayodhya. Hanuman accepted it as Bhagwan Ram was written over it.

Ravana once tried to Lift mountain Kailash, this enraged Bhagwan Shiv, who trapped him under mountain. Ravana then prayed for thousand year and Bhagwan Shiv was pleased by his penance and offered him special Linga to carry back to Lanka.

Ravan was half brother of Kuber.

Once Ravan broke his Arm to Construct a Musical Instrument to Sing songs of praise for Bhagwan Shiv.

Ravana agreed to be the Priest for the Pooja that Lord Rama did in Rameshwaram.

There is another Gita called Ravana Gita (the song of Ravana). In it, Ravana teaches Many Sermons to Lakshmana.

Following Ram, all his Brothers left this world by taking Jal Samadhi in Sarayu river.