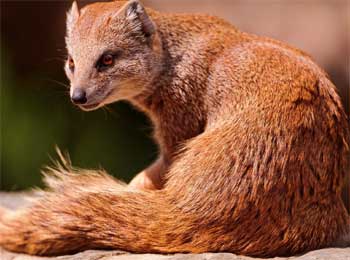 Once in a forest by a river side lived a mongoose who was very naughty and enjoyed irritating other animals who were already hurt.

Whenever any animals got hurt, mongoose would go to them and with great affection give them ointment saying that it would comfort them.

Injured animals would thank him but as soon as they applied ointment, their pain would increase and would scream. It was because Crook mongoose used to add lemon, salt and pepper to his ointment and when other animals screamed because of pain, he enjoyed it.

He did to many animals and one of them was rabbit. Rabbit thought that he would teach mongoose a lesson.


One day rabbit took two baskets, one small and one large. He took some coal tar and stick it under larger basket.He took both baskets and went to mongoose and said, “Let’s go to the mountain, there is sweet mango tree. We can collect them and bring back here.”

Mongoose quickly picked up a large basket in greed to get more mangoes.

After going to mountain, both started to fill their baskets with sweet mangoes. Because of lots of mangoes, mongoose basket became heavy. Mongoose had to keep his basket on ground, to gather more mangoes.

But as soon as he kept basket on ground, because of coal tar under basket, his basket was glued to ground.

Mongoose started feeling hurt, just then rabbit gave an ointment to mongoose and said, “Apply it on your wound, it will give you relief from pain.”

Mongoose quickly took that ointment and applied it. But as soon as he applied that ointment, his pain increased.

Just then mongoose understood the trick of rabbit. Now he understood that how much his bullying had hurt others. Mongoose apologized for causing trouble to others and vowed not to do such thing again with others.

Moral:
We should try to Understand Others pain and Help them, not make fun of them.

You May Also Like: Brother’s Story – Tit fir Tat

Search Keywords: Naughty Mongoose – Tit for Tat Story, Short Animal Stories for Kids with Moral Lesson, Do not Create Troubles for Others Story