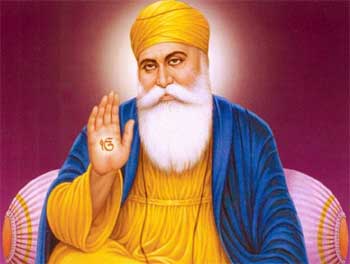 Guru Nanak Dev Ji was the First of the ten Sikh Gurus and the Founder of Sikhism. The Birthday of Guru Nanak Dev Ji is Observed as “Guru Nanak Gurpurab” across the Globe. He is considered as One of the August Religious Thinkers ever.

He who Regards all Men as Equals is Religious.

Speak only That which will Bring you Honor.


He who has No Faith in Himself can Never have Faith in God.

Burn worldly Love, Rub the Ashes and make Ink of It, make the Heart the Pen, the Intellect the Writer, Write that which has No End or Limit.

Even Kings and Emperors with Heaps of Wealth and Vast dominion cannot Compare with an Ant filled with the Love of God.

Sing the Songs of Joy to the Lord, Serve the Name of the Lord and become the Servant of His Servants.

Alone Let him Constantly Meditate in Solitude on that which is Salutary for his Soul, for he who Meditates in Solitude attains Supreme Bliss.

That One Plant should be Sown and Another be Produced cannot Happen. Whatever Kind of Seed is Sown in a Field, Prepared in Due Season, a Plant of that Same kind, Marked with the Peculiar Qualities of the Seed, Springs up in it.

Only Fools argue whether to Eat meat or not. They don’t understand Truth, nor do they Meditate on it. Who can Define what is Meat and what is Plant? Who knows where the Sin Lies, being a Vegetarian or a Non-vegetarian?

If the People use the Wealth bestowed on Them by God for themselves Alone or for Treasuring it, It is like a Corpse but if they decide to Share it with Others, It becomes Sacred Food.

There is but One God. His name is Truth, He is the Creator. He fears None, He is without Hate. He never Dies, He is beyond the Cycle of Births and Death. He is Self-illuminated. He is Realized by the Kindness of the True Guru. He was True in the Beginning, He was True when the Ages commenced and has ever been True. He is also True now.

Let No man in the World live in Delusion. Without a Guru none can Cross over to the Other Shore.

There is but one God. True is His Name, Creative His Personality and Immortal His Form. He is without Fear sans Enmity, Unborn and Self-illumined. By the Guru’s Grace, He is obtained.

There are Worlds and more Worlds below them and There are a Hundred thousand Skies over them. No one has been able to Find the Limits and Boundaries of God. If there be any Account of God then Alone the Mortal can Write the Same but God’s Account does not Finish and the Mortal himself Dies while still Writing.

You May Also Like: Bhai Lalo and Malik Bhago Story..!

Search Keywords: Quotes by Guru Nanak Dev ji – Believe in God and Wisdom Quotes, Quotes about Importance of Following a Guru and Asceticism