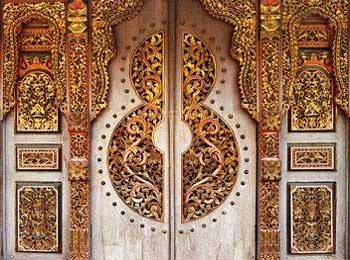 Once a mighty King ruled a kingdom. He didn’t have any children and because of his age, he was worried about future heir of kingdom. So, he decided to hand over the reins of his kingdom to a qualified youth.

He conducted a merit test for selection of future successor.

For test, a magnificent palace was built and a puzzle was written on closed door of that palace. It was announced in whole kingdom that all the youth of kingdom are invited to solve that puzzle and open the door of palace.

One who is successful in opening the door will be given that palace as gift and will also be declared the heir of kingdom.


From the day of announcement, there was an influx of young people in front of that newly built palace.

From morning till evening, young men used to come there and tried to solve the puzzle written on the door but no one was able to solve it. Many days passed. Even most intelligent were unable to find a solution to that puzzle and gave up.

One day young from other kingdom were invited. Many famous and intelligent young one came but as day progressed, one by one all left.

In end only three people were left. Among those two were from other state and third was a simple young man from kingdom’s village.

While both young man from other kingdom were engaged in solving puzzle, young man from village was standing in corner looking at them. When King saw him standing like this he called him and asked, “Why are you not trying to solve the puzzle?”

He replied, “Your majesty, I have come here to see eminent people. If they find a solution then one of them will become the heir of kingdom. What could be more joyous than this? If they can’t find solution then i will try.”

Saying this young man went back and sat in corner, looking at those two young men. Whole day passed, but none of them could solve the puzzle. Whole day they tried to find way to solve the puzzle and open that door. At last they gave up.

After seeing this, young man sitting in corner got up and went to door and opened it.

As soon as door opened, people started asking him what did he do. How was he able to solve the puzzle and open that door.

Young man replied, “While i was sitting and watching everyone trying to solve that puzzle, a thought came to my mind that there might not be any puzzle to open the door. So I went and went first and pushed the door. The door opened. There was no puzzle to be solve to open the door.”

King heard his answer and was very pleased. As promised young man was given that palace as gift and was declared heir of the kingdom.

Learning:
Many times in life, we get caught in such a situation where we feel like we have a problem like a mountain in front of us and think that it solution must be complex and difficult. So, we keep getting entangled in it by making it bigger.

Later when problem get solved, we realize that it was very simple and very little effort was needed to solve it. Therefore, one need to think calmly and then try to solve problem.

You May Also Like: Three Toys and Their Value – King and Toy Seller Story