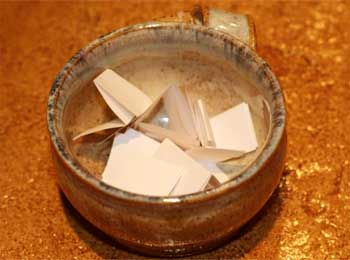 Once there was a famous sage who used to live up in Himalaya mountains far away at place where not many people would go. Still people who heard about him would walk up the difficult path to meet him.

One day a group of travelers who went up on mountains, got to know about that sage and his wisdom. So they decided to visit him. On reaching there, they all greeted sage.

Each of them wanted to talk to him about their pwn problems and ask for solution, so they started to fight among themselves about who would go first.

Fight among them got loud and soon it was chaos there, each one of them was saying that his problem is bigger and he needs to talk to sage first… Sage watched this commotion for a while and not seeing them getting to any decision, he shouted, “Silence..”


People got silent immediately. Then sage said, “I have a solution, all of you sit down in a circle on ground and wait for a bit..”

Saying this he left and came back with some sheets, pen and an empty bowl. He passed paper and pen to each one of them and placed bowl in middle.

He instructed, “All of you write down a problem which you think that trouble you most and then fold that paper and put that folded paper in bowl.”

Everyone started writing and when everyone finished writing, they put their paper in basket then sage pick up that bowl and mixed all those.

Then he calmly handed that basket to a person sitting in circle and said, “Now pass the basket around and pick up which ever paper is on top. Read the problem and if you choose, make it your own or take back your own problem.”

One by one each of them picked out a paper and read each other’s problem. When they read other’s problem they were horrified. Each one of them came to conclusion that even their worst problem not as worse as other person’s problem.

Within minutes each of them exchanged their problems and when they finally had their original paper in hand they felt content. They thanked the sage and went on their way.

Moral:
When we face Problems in our Life, we Complain about it.. But We should remember that Everyone have Their own Fight and What we Face might be just Smallest of Troubles what Other face.

One thought on “Problems in Life – Sage and Traveler Story”