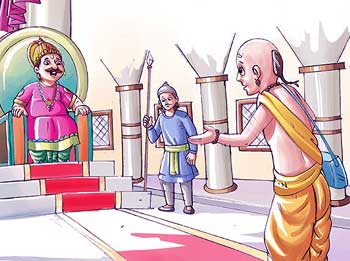 Long ago in a village lived a priest used to stay at local temple and had a little daughter. Once he earned 500rs and thought of saving that money for his daughter’s wedding. So he went money lender shop in village and deposited that money to him.

After few years when his daughter turned eighteen, priest went to money lender and asked for money but he refused saying, “When did you gave me money? Did i gave you something in written?”

Priest came back empty handed. He became very upset and was worried for preparation of his daughter’s wedding. Few days later, priest decided to go to King and complain about this.

Priest went to King’s court and narrated everything that happened.


After listening to him King said, “Tomorrow my procession will pass by your village and at that time you stand near money lender shop.”

Next day, as King said, his procession came to priest’s village. There everyone bowed to King and greeted him with flowers and gifts.

Priest was standing near money lender’s shop. As soon as King came near shop, he saw priest and bowed to him and greeted him saying, “Guru Ji, Why are you here? You are my Guru. Please come with me.”

Priest went with King. After procession moved far away from shop, King said, “Pandit ji. We have done our work. Now all depends on your luck.”

On other side, money lender who was surprised to see all this thought, “I think Pandit ji have good relations with king. What if he complains him and i lose everything.”

Money lender immediately asked his servant to find Priest. Servant found him and bought him back to moneylender shop with great respect.

As soon as Priest came, money lender bowed to him and said, “Pandit ji, i worked hard and looked into old account. There i found that you have deposited 500rs here. In last ten years, 5000rs interest have also been raised on that amount.

Pandit ji your daughter is also like my own daughter. So here are 1000rs more as gift from my side for your daughter’s wedding.”

Thus because of King’s small act, money lender not only gave back Priest principle amount but also gave huge amount of interest for it.

Learning:
When because of Relation to Just a King, our problems can be solved then What if we we Connect ourselves to World’s King i.e. GOD then we can come over any kind of problems in our life and we will never have to face any injustice.

You May Also Like: Mountain Climber Story – Trust God’s Plan