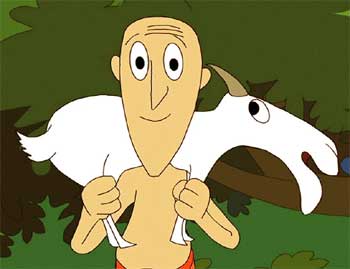 Once in a village lived a brahmin. People would invite him to their home for performing religious rituals and would offer him gift or fees before he leave.

One such day, a wealthy man presented him with a goat as a gift. Brahmin was happy to get goat as reward and slung it over his shoulder and began his journey toward his home.

On his way to home, three thug’s saw him and thought that goat would make a delicious meal for them. So they devised a plan to get that goat by fooling that brahmin.

As soon as brahmin arrived at a lonely place, one of those man came out of hiding and said to brahmin in shocking manner, “Why a pious man like you needs to carry a dog on his shoulder?”


Brahmin was surprised to hear such words and said, “Can’t you see right?? It’s not a dog but a goat..”

Brahmin continued his journey. He had walked barely some distance just then another one came out of hiding and said, “Why are you carrying a dead calf on your shoulder?”

Brahmin was already irritated and yelled, “How can you mistake a living goat as dead calf?”

“I think you seem to be highly mistaken.. Either you don’t know what a goat looks like or you think of me as fool who would believe your lie..” saying this he left.

Brahmin got annoyed but continued his journey..

After walking a while, third one came out and laughingly said, “Why are you carrying a donkey on your shoulder??”

Hearing those words, brahmin got really angry but didn’t said anything. After walking a while he thought to himself, “Is it really a goat??”

He kept on thinking about what those men said and thought that may be those were right and it’s not a goat.

Brahmin got scared and hurled that goat on roadside and ran away. As soon as brahmin left, all three men got together and laughed at him. They took that goat and had a feast.

Moral:
Repeated Lie can Make one Doubt himself but One should not be carried away by what other said.