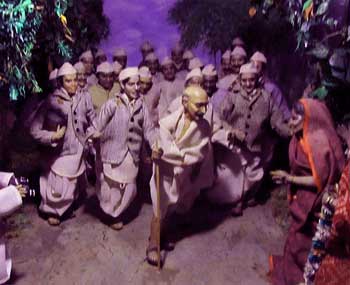 Mahatma Gandhi was on expedition to collect funds for sangh. He went to various cities and villages for his Charkha sangh. During his expedition he reached orissa and had organized a meeting there. He gave a speech and requested people to offer funds for sangh.

Soon she reached Gandhi ji and touched his feet. Then shoe took a cooper coin wrapped in the folds of her saree, placed it at Gandhi ji feet And left stage.

Gandhi Ji very carefully took the coin and placed it safely. The in-charge of the Sangh asked Gandhi ji for the copper coins, but he refused to give it.


“I keep cheque’s worth thousands of rupees for the Charkha Sangh, yet you won’t trust me with a copper coin.” in-charge of keeping track and hold of money offered for sangh said laughingly.

Gandhi Ji said, “This copper coin is worth much more than those thousands. If a man has several lakh’s and he gives away a thousand or two, it doesn’t mean much.”

“The coin was the only thing that old lady possessed. She was not even having proper cloths and seemed that she couldn’t afford good food, But still she gave everything she had. It was the greatest offer ever made.”

That’s why the copper coin was very precious for Gandhi ji.

Moral:
We may have tons of Wealth, but that doesn’t make us Generous. Offering helping hand when we have Nothing or very Little wealth makes it more Valuable.

You May Also Like: Three Man and Their Kindness