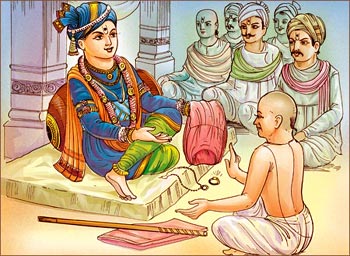 Maniraj was King of that Kingdom and heard words about saint and his skill. King wanted to greet him and also ask him about his future. So he invited sage to his palace.

King sent his soldiers to place of sage. Soldier went inside and told saint about King’s Invite for sage to his palace. Sage agreed to go with them. When sage came, King greeted him with respect and offered him seat in his court

Once sage got comfortable King asked sage to tell him something about his future.


After observing into king’s horoscope, sage started telling him about fortunes which were to be blessed upon him in future. King got very happy listening to all the good things in prediction of his future and rewarded sage with gold and silver for every blessing he predicted.

Now, King asked sage to tell him about misfortune. Every time King had to listen to misfortune he got angry. At one point he felt so infuriated that he shouted at sage saying, “Stop..!! How dare you say such non sense..!!”

King pulled out his sword and pointed it toward sage and said, “I order you to tell me time of your own death..”

Sage saw that King was angry and after doing some calculation he calmly replied, “According to my calculations, My death will take place just an hour before your death..”

King was stunned to listen to that and realized his mistake. He felt sorry for his behavior and shouting to sage and sent him home with more wealth.

Moral:
If We Think Wisely we can get out of Difficult Situation..

More Wisdom Stories – Why to Learn Together?