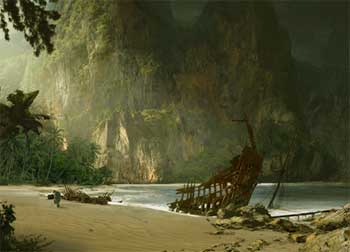 Once a ship was wrecked at sea due to storm and only out of all crew two men were bale to swim themselves to a small deserted island.

After both reached island, they didn’t know what to do and both talked and they reached on conclusion that there is nothing they can do except to pray to God and wait for rescue.

However, they both decided to divide territory between both of them and stay at opposite side of it. They did this to determine whose prayers would be more effective.

First thing they needed was food. So first man prayed for food and next day he saw fruits bearing trees on his side and saw that other man’s side was still barren.


After two weeks, first man felt lonely and prayed for wife and next day a women survivor from ship wreck swam to his side of land. On other side there was still nothing.

Next first man prayed for home and clothes and more food. Like magic he got all those things. Still other man side was same as before nothing changed.

Finally first man prayed for ship so that he and his wife could leave that island. Next morning a Ship docked at his side of island.

He boarded on ship with his wife. Then first man thought, “Since none of that person prayers have been answered. He is unworthy of leaving that island.” First man decided to leave other man on island.

As ship was about to leave, first man heard a voice from sky saying, “Why are you leaving your companion on island??”

First man replied, “Since i got everything i prayed for That means my blessings are result of my faith and prayers. His prayers were unanswered that why he has nothing on his side and so i figured he does not deserve to leave island with me.”

Voice from sky responded, “You are sorely mistaken. You are in great debt to that man.”

“It was that person’s faith and prayer that invoked your blessings as he was one who prayed that all your prayers might be answered.” replied voice from sky.

Moral:
Never Judge Other’s on what you See.

You May Also Like – Farmer and His Two Daughter’s Request..!!