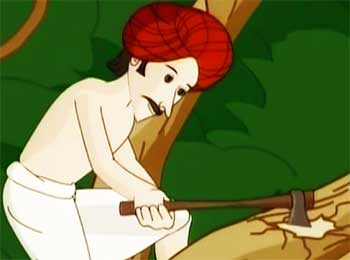 Once upon a time, a King went for hunting but it got late. While returning back, because of dark he was unable to find his way.

He forgot his way and at last he found a small hut.

King went and knocked on door and asked for shelter. That hut belonged to a poor farmer. He took great care of King.

Next day, King was happy because of poor farmer care.


Before leaving King said, “You took great care of me. I am very happy with your welcome. As a thank, I am giving you nearby sandalwood forest as gift.”

But unfortunately, he didn’t know value of sandalwood. He started to make coal from that sandalwood and sell it in market.

Soon, he cut down several trees from forest and sold them as coal in market. At last only few sandalwood tree was remained in forest.

Next day, it rained a lot, farmer was unable to make coal from that wet wood. So he cut down few branches and took them to market.

Sandalwood smell attracted many customers and hey were willing to pay a lot for even small branch.

This confused farmer. He asked one of his buyer, “Why everyone is willing to pay huge amount for this wood?”

Buyer replied, “This is sandalwood. It’s very expensive. If you have more woods like this then please let me know. I will pay good amount for it.”

Farmer realized that because of his unawareness, he wasted sandalwood and sold it for pennies.

When farmer understood this, he started to cry and just at that moment a saint was passing by.

Saint asked farmer reason for crying. Farmer told him everything.

Saint said to farmer, “Don’t regret. All people in world are making one or another mistake. Every moment is precious but people waste it in useless things.

But it’s better late than never. You still have some left. You can use i wisely.”

Farmer realized his mistake and then went back and sow more sandalwood seed in forest.