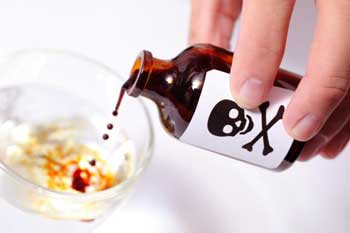 
A newly wed girl name Arti came to her new home with her husband and mother-in-law. After few days Arti felt that she can’t manage to live with her mother-in-law under same roof as Her mother-in-law was old fashioned and she had different opinion about things because of this they both used to fight a lot.

Months passed and her life with her mother-in-law didn’t changed. Her mother-in-law used to interrupt her or suggest her about how to do things. Things were starting to get worse. Now she just couldn’t bear to live with her anymore. One day she told her husband about things going on and her husband supported his mother. Arti got angry with him and left for her father’s house.

Arti went to her father and she told everything to her father who was a renowned ayurvedic doctor. She was crying and said, “Papa, please give me some poison to give to my mother-in-law because i will no go there till she is there.”


Her father tried to console her and said, “Dear, If you give her poison and she die then police will arrest you and then me. I think it will not be safe to do so.”
Arti replied, “I don’t know anything. You have to give me poison to kill her. I don’t want to see her or have her in my life anymore.”

After thinking for while her father said, “Ok, I will do as you wish but i can’t see you going to jail you have to do as i say. Do you agree?”
Arti replied, “Ok, but what do i have to do?”

Now her father brought to her a small pack and said, “You have to add just a pinch of poison in your mother-in-law food everyday. Due to less quantity of poison she will not die immediately but she will get weak and after 5-6 months she will die and people will think that she died a because of weakness.”

Father continued, “But you have to be very cautious that your husband doesn’t get even a hint about it because if he get any idea or doubt about you then you will have to go to jail. To make sure that he doesn’t doubt you, you have to stop fighting with your mother-in-law from now on and you will treat her with respect and care and listen to her silently even if she treat you bad or taunt you. So tell me will you be able to do all this?”

Arti thought that it’s just for 5-6 months and after that her mother-in-law will die so she agreed. She took that small pack of poison from her father and left for her husband’s house.

But now environment of house was changed. Arti and her mother-in-law fights were now things of old days. Now they both started to care for each other. Now, mother-in-law used to sit with Arti have food with her, talk to her, and she now wouldn’t go to sleep until she have spend some time with Arti.

She said to her father, “My mother-in-law is very sweet and now i don’t want her to die. Please give me medicine to reverse the effect of poison you gave.”
He father laughed and said, “Poison? what poison? i had given you some digestion medicine for you mother-in-law!”

Moral:
Parents should not let their child ruin their life or let them do wrong things because of anger. Parents should direct them in right direction and help them to change situation into positive one. If we want to see change in people first we have to Bring that change in ourselves.

You May Also Like: Divorced Couple Dinner at Restaurant..!

11 thoughts on “A Pinch of Poison! After Marriage Moral Stories”