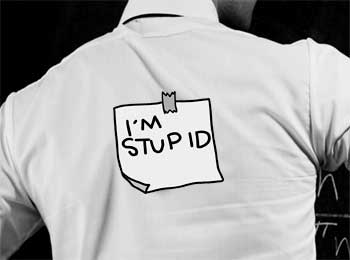 Once in a class, a student thought to play a prank on one of his classmate. He took a paper and wrote on it – I am Stupid and then he took that paper and stuck it on the back of his classmate, without getting noticed. When other students saw this, he asked them not to tell him about it.

So entailed a joke among classmates throughout the day.

Last lecture was of mathematics, professor came and wrote a question on board. Question was difficult and no student raised his hand to answer except one who had paper stuck on his back.

Professor called him to come to front and solve that question on board. While student was walking towards front, all students were making fun of him behind his back. Professor noticed that.


Amidst the snickering, student solved that question and was about to go back. Just then professor stopped him. Professor praised him and clapped for him. Then he removed paper that was stuck on his back.

Professor gave him that paper saying – This was stuck on your back. When student saw that paper he felt embarrassed.

Then professor faced towards the rest of class and said, “Let me tell you something… Throughout your life, people will put labels on your back with many bad things written on it, to stop your progress.

If he had known about paper that he would not have gotten up to answer the question. All you have to do in life is ignore these labels people give you and use every chance you have to progress, learn and improve yourself.”

You May Also Like: Teacher Lesson to Student Arguing – Point of View