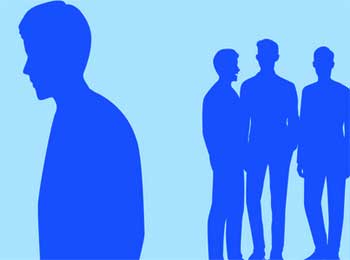 Once upon a time, in a village lived a honest man. All the people of village used to praise and admire him. He was happy that all people in village liked him

One day, while returning from work, he heard that some people were talking about him. He knew people of village always praised him, so he couldn’t stop himself from listening to them.

while hiding behind tree, he started listening to them but when he heard their words, he became sad. Those people were not praising him but saying that he was arrogant and person who likes to show off.

Those words shook his mind. He started thinking that till now he was under illusion that everyone liked and praised him where as reality was opposite.


From that day on wards whenever he saw someone talking, he started thinking that they must be talking ill about him. Even when anyone praised him, he would think of it as joke.

Due to such thinking to his mind, his behavior started changing and stayed sad all the time. His wife noticed this and took him to a Mahatma who came to visit that village.

After meeting Mahatma that man narrated whole incident to him and said, “I am hurt. Everyone keeps talking bad about me.”

After listening carefully to that person, Mahatma said, “Son, tonight you will have to stay in my ashram.”

He could not sleep properly because of all the noise.

In morning, he went to Mahatma and said, “I couldn’t sleep because of all noise. It seems that there must be hundreds of frogs living in that pond. You must also be having troubles because of them. If you permit, i will bring some laborer and take them out and put them away in a far river.”

After taking permission from Mahatma, person went to the pond to take out frogs. When net was thrown into pond, only a handful of frogs were caught and came out of it.

Seeing this, man went to Mahatma and said, “At night, it felt like there were hundreds of frogs in pond. Where did they go today?”

Mahatma said, “Son, Even in night there were only an handful of frogs but they made so much noise that you thought their number were in hundreds.

Now whenever you listen to anyone saying bad about you, then think that those people are like a handful of frogs in pond.

Always remember, no matter how good you are, there will always be some people who will talk bad about you.”

That man understood Mahatma’s words and came out of his extreme despair.

You May Also Like: Pig’s Provocation – Ways to Deal With Wicked Person

Search Keywords: People Talking Behind One’s Back! Mahatma Lesson to Man in Despair, Story about How to Deal with Ill Talks, Story to Motivate one to Keep a Positive Attitude, Deep meaning Story for Adults, Mahatma Advice to Man Short Story, Story with Lesson for Life