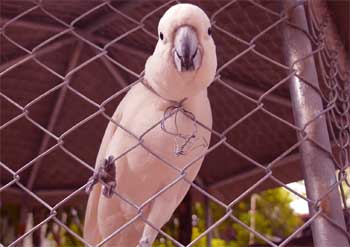 In town lived a man who had a parrot which used to live in a cage. Once in town visited a Sage who used to do Satsang. Man used to go to Satsang everyday.

One day his parrot asked him, “Where do you go daily??”

He replied, “I go to Satsang to learn good things.”

Parrot said, “Can you do me a favor? Please ask that Sage – When i will be able to get freedom?”


Next day man went to Satsang. After Satsang was over, he went to Sage and said, “Maharaj, There is a parrot at my home and he wanted to know when will he get freedom?”

Just after listening to him, Sage got unconscious and fell. When man saw this he got scared and left from there silently.

When he reached home. His parrot asked him,”Did you asked my question to Sage?

Man replied, “I did but it seems you have bad luck.. As soon as i asked him your question, he got unconscious and fell.”

Next day when man was leaving. He saw that parrot unconscious inside cage. Man went toward cage and opened it to check if parrot was dead but as soon as man opened cage and picked parrot out of that cage to check. It woke up and flew away.

Man went for Satsang. When Sage saw him, he called him and asked, “Where is your parrot now??”

Man replied sadly, “In morning, when i was about to leave. My parrot faked being unconscious and fell inside cage and when i opened cage to check on him, it flew away.”

Sage smiled and replied, “You have been stuck in the cage of worldly delusion, even after listening to Satsang for so long you haven’t learn anything and look at that parrot even without coming into Satsang, he understood my hint and got his freedom.”

Moral:
This story implies that When we go to Learn or Listen for Enlightenment, even at that time Our Mind always remains Entangled in Worldly Matters and We tend to focus on only those things in which Our Selfishness in Proven.

2 thoughts on “Sage Hint for Parrot.!”