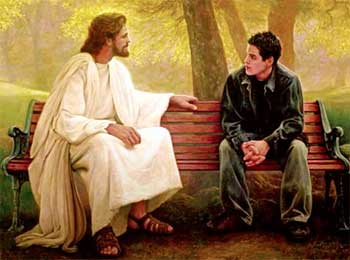 One day, a man asked Jesus, “What must i do to go to Heaven?”

Jesus replied, “What do the scriptures say?”

“Love thy God with all your heart, mind and body and love your neighbor as yourself.“, replied man.

Jesus said, “Right. You have answered correctly. Do this and you will be able to go to Heaven.”


Man was replied, “But i don’t understand this thing about neighbor. Who is my neighbor?”

Jesus said, “Once, there was a man who was going on a journey from Jerusalem to Jericho. On his way, he got attacked by robbers. They took everything, his money, clothes and beat him mercilessly for resisting to part with his belongings and left him half dead on highway.

Sometime later a priest from nearby came that way and when he saw that traveler, bleeding and groaning lying in road, he muttered a prayer and hurried away.

Little later, a townsman came by and was startled at sight of bloodied and moaning traveler lying on path. Seeing him, he guessed that unfortunate man had been robbed and not wishing to suffer same fate, he hurriedly stepped aside and went on his way.

Then a Samaritan came riding up on his donkey. He was in great hurry but when he saw traveler hurt and lying on road, he at once stopped and stepped down from his donkey.

He washed man’s wounds with whatever little water he had and then bandaged them. Then hoisting man on to his donkey, he took him to nearest inn and there he arranged board and lodging for his treatment for him.

He ensured innkeeper that, he would pay on return of his journey for whatever extra money he spend on that man. Saying that he hurried away.”

Jesus then said to man, “Now, tell me. Which of these three men behaved like a neighbor?”

Man replied, “The Samaritan. He showed fellowship and kindness to that total stranger.”

“Do so likewise. This is answer to your question. Every man in need is your neighbor.“, said Jesus.

2 thoughts on “Who is My Neighbor? – Man Question to Jesus”