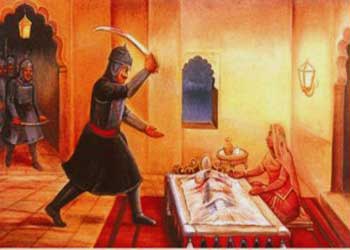 In 16th century, there was nurse name Panna dai who was in service to Maharana Sangram Singh. She was responsible for taking care of son of Raja. She used to take care of him along with her own son Chandan who was of similar age as Young Udai. Both kids used to play together.

During 2nd and 3rd decades of 16th century a lot of trouble was faced by kingdom and it lost Sangha as its king due to wounds sustained at battle. Sanga’s elder son’s died one after another in battle. Throne was succeeded by Vikramaditya at young age of 14.

After defeating enemy Vikarmaditya came back to continue his reign but because of short temper of Vikramaditya, no one in his court liked him and one day because of this all nobles decided to rebel and orders were placed to arrest Vikramaditya.

Now Udai singh was the only heir-elect to the throne but he was young so King’s court appointed Vikramaditya distant brother to act as Regent. Distant brother felt that he is rightful heir to throne so he planned and assassinated Vikramaditya in prison and sent assassin to kill young Udai.


Same time Panna dai just feed and put both kids to sleep. A servant ran to Panna dai to tell her about assassins who were coming that way to kill Udai. Panna dai was loyal nursemaid and knew that future of Kingdom depend on young Udai and he must be saved.

She acted quickly and instructed servant to put sleeping Udai into basket and take him to nearby river where she would join later. She summoned all her strength and lifted her sleeping son changed his clothes with prince and placed him in place of prince in his bed, covering him with blanket.

Just in few moments Assassins burst into room with sword in hand to kill prince and asked Panna about where about of young Udai. She pointed toward prince bed and watched in horror assassins killing her own son brutally. Distant brother informed court about Udai death and claimed throne.

Grief stricken Panna dai packed some clothes and other things and left for spot near river where servant was waiting for her with young Udai. After many years struggle royal nursemaid and Udai returned to kingdom and after ensuring safety of Udai she told whole story of deception and escape. After this nobles proclaimed Udai as their king.

Panna dai sacrificed her own son to save heir of throne at Mewar. She showed her Loyalty and Courage to go beyond limits to save only heir of kingdom. Panna dai name and her deeds will live forever as symbols of extraordinary loyalty, patriotism and personal sacrifice.

You May Also Like: Oil Lamp and Traveler..! (Chanakya Story)