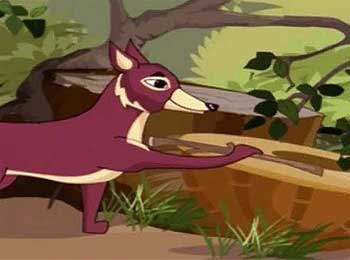 Once upon a time, a jackal wandered away from his jungle and reached a deserted place. He was very hungry, so he started looking for food.

Suddenly he heard a strange sound. Jackal got scared and decided to run away.

But then he thought, “I should carefully, at least check who is making this sound.”


As he gathered his courage and looked around, he found that a drum was lying next to a tree and as wind blew, branches of tree rubbed against it, making the sound.

Seeing this he was relieved and continued his search for food.

Moral:
Do not React blindly with Fear. Face Difficulties, instead of Running away. 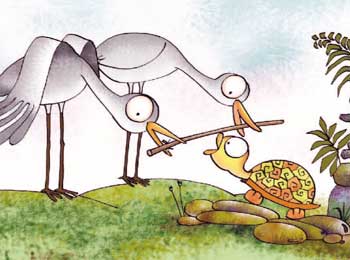 Once upon a time, a tortoise lived near a lake. It was friends with two swans who also lived in lake.

One summer, lake began to dry up and there was little water left for animals. Swan told tortoise that there was another lake near by and they should go there to survive.

They came up with plan so that they can help tortoise to come along to that lake.

Both swan hold a stick ends and asked tortoise bite the center of stick and told it not to open its mouth, no matter what, until they reach on ground.

Tortoise agreed. Next day, both swans held ends of stick with tortoise in between.

When they fly over a village, people of village were awestruck to see flying tortoise. Commotion started on ground about swan and tortoise.

Listening to all that noise, While they were still in air, tortoise opened its mouth and said, “What’s all this commotion is about?”

And moment he opened his mouth, it fell to it’s death.

Moral:
One should Speak at Right Moment.