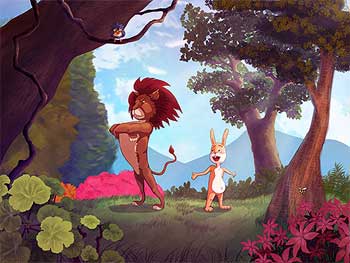 Once upon a time in a forest a hare was resting under a tree. While resting he was thinking about what would happen to him if earth break. Just then he heard a very weird sound. He got scared and said, “Earth is breaking up..” and started running.

On his way another hare saw him and asked, “What happened? Why are you in such a hurry?
He replied, “If you want to live.. you better run too as earth is breaking up..”

Listening to this both started running as fast as possible. While running through forest both shouted, “Everybody run.. earth is breaking up..”

Very soon thousands of hares started running through forest. On seeing them running other animals got frightened too.


News spread from one animal to another in no time and everyone was trying to escape and their cries of fear created chaos all around.

A lion who was standing on a hill saw all animals running through forest and thought, “What’s matter? Why is everyone running like mad..?”

He came down from hill and positioned himself in front of crowd. He roared so hard that all animals were frightened and stopped where they were.

Just than a little bird said, “Earth is breaking up..”
Lion asked him, “Who said this?”

Bird replied, “I heard it from a deer.”

When lion asked hares they pointed one other until they recognized the one who stared this menace.

Lion asked him, “What made you think that earth is breaking up?”
Hare replied, “My lord.. I heard that cracking sound with my own ears..”

Lion investigated whole matter and ultimately came to know that sound was caused by a falling of a large bunch of coconuts from tree on some rock.

Moral:
It’s better to Check on Rumor rather than Acting Rashly upon it.