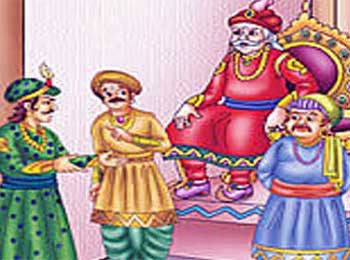 Once four friends were passing by forest where they found a vessel filled with money. Seeing that, they decided to go to town and start a business with that money.

Three of them liked suggestion, however fourth one didn’t like idea. Still he decided to stay quiet and planned to steal money, they found.

Four men reached a town where two of them ventured out to learn more about place and other two guarded their money vessel.

Soon, two men came upon an old woman whose house seemed to be comfortable and suitable for their needs.


Soon, both returned to their friends and told them about old woman house. All of them agreed to stay there.

They went to old woman’s house and one of them said, “We are four merchants and want to start a business in this town. We are looking for a house and want to rent a room.”

Second said, “We will pay you good rent till we decide to leave.”

Old woman agreed to rent them rooms. She was glad to have good tenants.

They got to know that she was a very honest soul, so they trusted her with their precious money vessel.

They said, “Please keep it safe with you. Remember, you must give it only if all four of us together ask for it.”

“All right!”, said old woman and took the vessel.

She safely put vessel at a place, which only she knew.

Four men started to go out in search of work in town. Soon, they felt tired and sat below a banyan tree to rest.

Just then a woman selling buttermilk was passing by that road, so, they decided to buy some but they didn’t had any money left, nor do they had any energy to go to old woman’s house which was just few meters away.

So, fourth man who was waiting for such moment, said that he will go and bring money from vessel.

He went to old woman house and said, “Others have sent me to fetch vessel.”

Old woman refused to give saying, “Sorry, i can’t give it to you. I can only give that vessel if four of you come together.”

Just then he thought and said, “My friends are too tired and are sitting under the banyan tree some distance away. You can ask them yourself.”

Old woman went outside and saw them, she shouted, “Did you send you friend for vessel?”

Old woman told fourth man about place of vessel and got busy with her work. Fourth thief took that vessel and ran out quietly by back gate.

As time passed, seeing no sign of their friend, they got worried. So, they went to old woman’s house.

They went inside and asked old woman, “Where is our friend we sent to collect vessel?”

Old woman was surprised and said, “I told him about vessel awhile back. Did he not give it to you?”

Three men realized that they have been tricked by their friend but they decided to blame old woman for their loss and said, “We told you to give vessel only if four of us came together, still you gave vessel to him. We suspect that you and our friend hatched a plot to cheat us. You stole our money.”

Old woman was upset and crying.

At same time, King was touring town and saw old woman. He stopped and asked old woman for her reason to cry. She told everything to King.

King asked old woman to come to court next day.

Next day court was sat up and old woman and three men came. Here King’s wise minister listened to story of both sides.

Minister asked them, “This old woman had to give vessel only if all four of you came together. Wasn’t that the condition?”

Then minister said, “Good! She is ready to abide by agreement and will give you vessel but there are only three of you. Call fourth man so that the term of your agreement are fulfilled.”