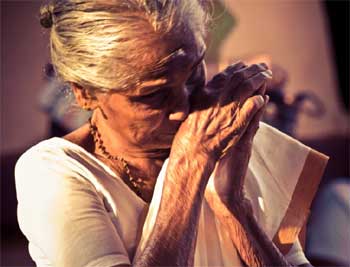 Once in a village, lived a blind old woman with her son and daughter-in-law. They were very poor.

Old woman used to pray to Lord Shiva everyday. Because of her prayers and devotion, one day, Lord Shiva appear before her and said, “I am moved by your devotion. I will grant you one wish. So ask me anything. Tell me what you want?”

Old woman replied, “I don’t know what to ask for. I want nothing.”

Lord Shiva said, “If you don’t know. You can go ask your son and your daughter-in-law for advice. Then may be you will know what to ask for.”


Old woman still said that she didn’t want anything. But Lord still insisted then she agreed.

She went to her son. She told him about Lord appearance and wish. Listening to this her son replied, “Ma, let’s ask for wealth.”

Old woman thought to herself, “They both told me what they want but now i don’t know what to ask for, should i ask for wealth or grandson. May i should ask my friend about it.”

Thinking this Old woman went to her friend and told her about it and asked for her suggestion.

Friend replied, “Why should you ask for wealth or grandson? You still have few years more to live. So you can ask for sight, so that you can see.”

Old woman returned to her home and thought to herself, “What should i do? To keep my son and his wife happy i should ask for wealth or grandson. But if i think about myself then i should ask for my sight.”

Next day, Lord Shiva appeared again and said, “Ask me for something, tell me what you want?”

Old woman had made up her mind and knew what she wanted. She replied, “I want to see my grandson drinking milk from a golden bowl.”

Lord Shiv laughed and replied, “You have tricked me. You have asked for everything in just one wish. You shall have what you want.”

Lord Shiva gave her what she wanted. Because of Old woman wise thinking, desires for all three were fulfilled.