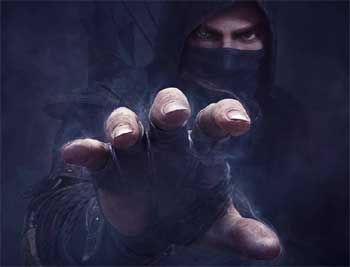 He would always leave marks so that people would know that he had stolen from there. He had stolen even from King’s treasury but still he was never caught.

Master thief was getting older and he had a son. One day his young son said to him, “Now, you are getting older, teach me your art.”

His father said, “If you want to learn then come with me tonight. This is something that can’t be taught by words only. I can not teach it to you, you can only imbibe spirit of me. If you are intelligent enough, you can catch it. I can not give it to but you can get it.”


Son was afraid as it was first time he was going to steal something. At night, he went out with his father.

Wall was broken, they went into the palace. Even his old age, master thief, his father hands were moving like a surgeon’s hand, unwavering, unshakable, with no fear. He didn’t even look here and there. He was so certain of his art.

Where as young man was trembling, he was feeling like he might fall any moment. He was losing all his consciousness because of fear, Thinking what if they were caught?

Both entered in palace. Father was moving in dark as if it was his own place and he knew everything about this place, even in dark without stumbling against furniture or door, making no noise at all.

They reached into innermost chamber of palace. There old man opened a cupboard and told his son to go in and find whatsoever was valuable.

As soon as son entered, old man closed the door from outside and shouted, “Thief! Thief! Wake up!” and escaped through the hole they had come from.

Son couldn’t understand it. This was too much for him. He was locked in cupboard, trembling and whole house was awake, searching for thief.

He thought, “What kind of father is this? What kind of teaching is this?” This was last thing young man could have ever imagined. Now he was certain to be caught.

After an hour young man reached home. His father was fast asleep. Young man questioned loudly, “What kind of nonsense is this?”

Father calmly replied, “So you are back. Just that you have come is enough proof that you are ready to start from tomorrow on your own. You have got the intelligence, awareness that a thief needs. I am immensely happy with you.

No need to tell whole story. You also go to sleep. Now you know the art, we need not to discuss anything.”

Young man was able to come back from such difficult situation, he wanted to tell everything to his father that has happened. He said, “You almost killed me..!”

Father replied, “It is hard but that’s how a master has to act many time. OK tell me what happened.”

Son replied, “When i was standing inside cupboard and people were searching for thief, a woman servant came with candle in her hand, i could see from keyhole. I started making noises as if i were a cat.

Thinking that there is cat inside cupboard, woman unlocked it. As she unlocked it, i don’t know how and what came to my mind – I blew the candle out, pushed woman away and ran.

People followed me. I was on verge of getting caught and suddenly i came across a well and saw a big rock, i don’t believe i have such strength to pick rock up but i moved that rock, picked it up and threw it in well and ran away.

That noise, sound of rock falling in well, grabbed everyone’s attention, as they thought that i had jumped into well. They all surrounded well and looked there. In mean time, i ran and that’s how i am back home.”

Father replied, “In any fields of life, whether you are a thief or a scientist or poet, this is master key – that nothing happens from head, everything happens from somewhere – call it intuition or gut or meditation – these are different name for same thing.

Learning:
When Life is at Stake, Your whole Energy become Available. You don’t live only on Superficial level and Do your Best.

Search Keywords: Old Thief Story – Self Awareness Lesson Taught to Young Man Short Story, Story about Importance of Being Self Aware and Work