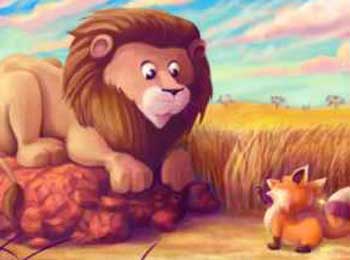 Once upon a time, in a village lived a lazy man who didn’t like to work and would always look for an easier way to feed himself.

One day, while searching for his food, he saw a fruit farm. He looked around and didn’t see anyone guarding that farm, so he decided to steal some fruits from farm.

He walked into farm and started to climb the tree, just at that time farmer came and saw him climbing tree. Farmer shouted at him and asked him to come down.

Lazy man got scared and didn’t came down. Seeing this farmer went inside and came back with a big stick to hit him. When lazy man saw this, he quickly came down before farmer could reach him and ran towards near by forest and hid there.


After sometime, he got up and while passing through forest, he saw a fox who had only two legs and was crawling.

Lazy man thought, “How can this fox stay alive in such condition? This fox can’t run, how he is able to feed himself or stay safe from threat of other animals?”

Just then he saw a lion coming toward that fox, with a piece of meat in his mouth. Seeing lion all other animals ran away but fox stayed there only..

But what happened next surprised that lazy man.

He saw that lion dropped that piece of meat in front of fox. Fox ate that meat.

Lazy man was happy to see God’s play. He thought, “God who is creator of all always have a plan set to take care of all living beings.”

Thinking this, he thought that if God had such plan for fox then God must have something planned for him too. So, he moved forward and found a tree alongside road.

He sat below tree and started waiting for someone to feed him too. He kept looking at road waiting for his food. He waited for two days but still no one came with food.

At last, when he couldn’t bear his hunger anymore, he left in search for some food.

On his way, he met an old sage and told him everything that happened. Sage gave him some food and water. After eating food, lazy man questioned sage, “Oh wise one, God had shown his mercy upon a crippled fox but no one came for me. Why God was so cruel to me?”

Moral:
Often we Misunderstand the Signs. God has given everyone a Strength and Ability to do their part. Always learn to see the things in a Positive way and see yourself in a Strong position to Help the ones who need. Don’t go for the Easy choice. Make a Right choice.

You May Also Like: Farmer Whining and God’s Response