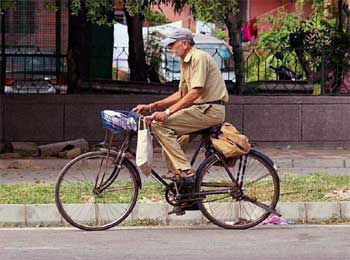 One day an elderly postman knocked on door of a house and said, “Take the letter..”

As soon as he said this, a little girl’s voice echoed from inside, “I am coming now.. please wait.”

But even after 5 minutes no one came. Postman again said, “Is there anyone tho take your letter? I have to go to many more places..”

Girl replied, “Uncle, if you are in a hurry, put the letter under the door. I am coming it will take some more time..”


Old postman replied, “No, i am waiting. It is a registered letter. So someone’s signature is also needed.”

After about 10 minutes, door opened.

Postman was angry about delay, he was about to shout at the girl but as soon as door opened, he was shocked to see that in front of him, was a little handicapped girl who had no legs.

Postman quietly gave the letter and took her signature and left.

Little girl often lived alone in her house. Her mother was not in this world and father used to work far away. To take care of the girl, a maid used to stay in the house with her in the morning and evening but she used to live alone in her house during the day.

In a month or two whenever mail came, postman would knock and call for girl and then wait patiently at the door. Gradually, interaction and attachment grew between them.

Rainy season came. One day when postman left after giving letter to girl, his footprints were left on wet soil. Girl came out with a paper and put it on print and took down picture of his feet. Next day, she asked he maid to get shoes of that size and keep them in house.

Before Diwali was about to come, postman went to houses he used to deliver mail, to ask for Diwali gift but when he thought about little girl, he started thinking it wouldn’t be right ask anything from her. He also started thinking that he shouldn’t meet girl empty handed during festival.

After much thought he bought a small chocolate for little girl. Next day, he went to little girl’s house and knocked.

When girl opened door, old postman handed her chocolate and said, “Take this small gift from your uncle’s side.”

Girl was happy to get that and asked postman to wait for sometime.

After a while, she bought a big box and handing it to postman, she said, “Uncle, this is a gift from my side to you on Diwali.”

Postman was surprised to see the box. After thinking for a while he said, “You are like a daughter to me. how can i accept a gift from you?”

Little girl insisted and said, “Uncle please don’t refuse my gift. I will be sad.”

“Ok.”, said old man kept box and lovingly put his hand on girl’s head as if blessing her.

After going home, when postman opened the box, he was surprised to see the there was a pair of shoes in it. His eyes twinkled. Postman couldn’t believe that little girl was so concerned about him.

Next day, postman reached his post office and pleaded to postmaster that he should immediately be transferred to another area.

When postmaster asked reason. He told him everything and said with wet eyes, “Sir, after today i will not be able to go to that street. That little girl saw me barefoot and gave me shoes but how will i be able to give her feet?”

Saying that postman burst into tears.

To Feel Pain of others and to understand their suffering, is such a human quality without which human is incomplete. We should pray God to grant us

all precious ornament of sensitivity so that we can do our part in reducing sufferings of others.

You May Also Like: Price of A Miracle – Little Girl Heart Touching Story