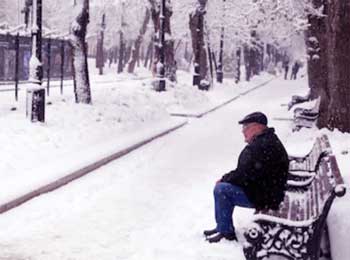 Long ago on a bitter cold evening, There was a group of riders sitting by river side. Beside them was an old man, who was waiting for a ride to get across river. Old man’s wait seemed endless and his body became numb and still from cold winds.

Soon, one by one riders started to get up and go across river.

Anxiously, old man watched several horseman rounded the bend. He let first one pass without any effort to get his attention and then another passed. Finally last rider spotted old man.

As this one drew near, old man said, “Sir, would you mind giving this old man a ride to other side, there doesn’t appear to be a passageway by foot.”


Rider replied, “Sure thing. Hop aboard.”

Rider saw that old man’s body was to stiff because of cold to move and get on horse, so he dismounted and helped old man onto horse.

Rider didn’t took old man just across river but to his destination, which was few miles away.

As they were near old man’s cottage, Rider inquired, “Sir, i noticed that you let several other riders pass by without making an effort to secure a ride. In such bitter weather why would you wait and didn’t ask any other rider? I was last one to leave, What if i had refused and left you there?”

In meantime, they reached destination. Old man lowered himself slowly down from horse and looked straight into rider eyes and replied, “I have been around for some time. I reckon i know people pretty good.

I looked into eyes of other riders and immediately saw that they were not concern for my situation. It would have been useless to ask them for a ride.

But when i looked into your eyes, kindness and compassion were evident. I knew then and there that your gentle spirit would not refuse and would give me assistance in my time of need.”

Those words touched rider deeply and he replied, “Sir, i am most grateful for what you have said. May i never get too busy in my own affairs that i fail to respond to needs of others with kindness and compassion.”

One thought on “Old Man and Horse Rider Conversation”