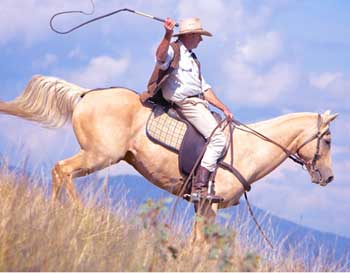 A young man was riding on a horse with heavily loaded mangoes which were packed carelessly. He traveled in his horse a long way to collect those mangoes. He wasn’t sure about how long it would take to reach home.

He saw an old man on his way and asked him how long he should travel to reach his place.

The old man looked at the heavy load and said, ‘if you ride slowly, you can reach your place in 3 hours. If you ride faster, you will reach home no sooner than early night!’

The young man was surprised at the words of the old man. It appeared very strange. However, he was in a hurry to reach home. He rushed his horse to run faster. As he rushed his horse, the mangoes started to fell off from the bag. He stopped the horse and picked the mangoes.


Again, he hurried in his horse and again few mangoes fell off. He picked again and lost some more. He tried to make the lost time but in vain. Many times he repeated the same and it took almost mid-night to reach his place.

He then understood the real meaning of the words told by the old man!

Moral:
Listen to Advise of Elders…

You May Also Like: Two Deer’s Story.. (Always Listen to Advice of Elders)